Canon’s documentary series Tales by Light used a ‘hexacopter’ unmanned drone to film scenes around the world. Screening on National Geographic Channel, each episode follows a different renowned photographer capturing images in a unique part of the world. 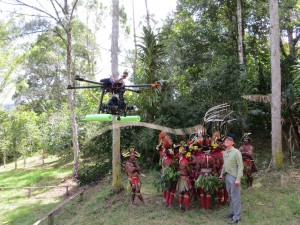 Joffe and his production team worked with specialist aerial photographer Toby de Jong, who has nearly two decades of experience in the field through his company 44 Magnum Productions in New South Wales, Australia.

“The main drone used in Tales by Light is a ‘hexacopter’ built by Toby for the Canon EOS-1DC cinema camera and also use with the photographers’ DSLRs, which all have the same body shapes,” Joffe comments.

“Having not just a pilot, but one who constructs and services the drone is a huge benefit. We were working in many extreme environments and when things need fine-tuning or repairing, he was able to manage it all.

“We required not just a pilot but someone who understands composition and uses motion to capture a subject.”

There is more to it than just flying in perfect conditions in a park using a strong GPS signal.

“In the past these aerials were only achievable by employing a helicopter at great expense,” Joffe considers: “There are many shots that were just not possible to capture before low-impact camera drones became a reality.”

Transporting the drone equipment to the filming locations was in fact the biggest challenge, due to the complications of taking specialist kit through airports.

Many parts of the world – and particularly the US – heavily regulate the commercial use of unmanned drones. This is often tied to safety concerns involved with flying over heavily populated areas. The Canon team didn’t have these concerns as they were filming in such remote locations.

“It’s important to employ the skills of a specialist,” Joffe stresses: “There is more to it than just flying in perfect conditions in a park using a strong GPS signal.

“Most of the time when shooting in remote places, you encounter tricky conditions, questionable power connections and little to no GPS to aid flights, so you really want to have a strong skill set supporting you.”

To find out more about the Tales by Light series click here.