Woody Harrelson will play Lyndon B Johnson in a new film about the 36th President of the United States that will shoot on location in Texas, Louisiana and Washington, DC. Production for LBJ will follow historical drama The Free State of Jones, filming in New Orleans. 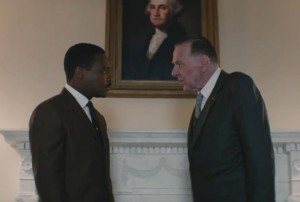 Johnson became President when John F Kennedy was assassinated in November 1963. The new movie will focus on the political turmoil he faced upon taking Office. Rob Reiner will direct.

“During the sixties I was a hippy and Lyndon Johnson was my president,” said Reiner: “At the time LBJ was the target of most of my generation's anti-Vietnam-War anger. But as time has passed and my understanding of political realities has grown; I've come to see LBJ in a very different light.

“He was a complex man; a combination of brilliant political instinct, raw strength, ambition and deep insecurities. The strength and power of persuasion that he showed to his colleagues existed alongside of a soft, almost childlike quality that perhaps only Lady Bird got to see. His life's path was nothing short of Shakespearean.”

Johnson’s approach to the historic Civil Rights Act was re-examined recently in the critically-acclaimed drama Selma, in which British actor Tom Wilkinson portrayed the President (above).

Louisiana is one of the top production hubs in the US, although it will shortly introduce a cap on its generous filming incentive programme.

Texas and Washington are popular settings but actual location filming is limited as neither offers a competitive filming incentive. Louisiana and New Mexico are popular doubles for Texas, while California and Maryland routinely stand in for Washington.