Wartime TV drama Home Fires will film a second series on location in Cheshire, northern England. Set during the Second World War, the drama follows a group of women keeping up morale and their community spirit in an English village. 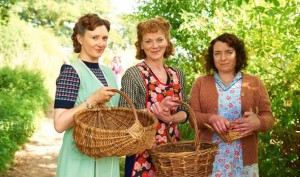 Home Fires was created as a series and written by Simon Block and has been second only to international hit Downton Abbey as one of the most successful Sunday night TV shows on ITV.

“We’ve been really pleased with how viewers have taken Home Fires to their heart,” said Steve November, Director of Drama for ITV.

“Their war effort is an intriguing aspect of our national social history and we’re delighted the women will be reunited for a second series.”

“The new series will play out under the Battle of Britain and the frighteningly real prospect of German invasion and defeat. It was a very challenging and dark period in our country’s history. Whilst the men were away fighting, the women left behind had to face their own fears.”

The renewal of Home Fires follows two recent period production commissions from ITV, both of which will be filmed in the UK.

Churchill’s Secret will be filmed as a TV movie telling the story of a major health scare experienced by the famous British leader nearly a decade after the Second World War.

New miniseries Victoria will follow the life of the young Queen Victoria in the year she ascended the throne in 1837.