London, Morocco and Vienna were chosen as the main filming locations for Tom Cruise’s action sequel Mission: Impossible – Rogue Nation. The movie follows the Impossible Mission Force as they track sinister organisation The Syndicate across the world.

The new film’s signature stunt features Cruise dangling from the door of an A400 aircraft during takeoff and was shot at RAF Wittering in Cambridgeshire. Cruise performed the stunt himself no fewer than eight times, secured to the door by a slender safety cable.

“It’s beyond believable because Tom really did fly on the side of this plane,” says JJ Abrams, onboard as a producer: “It’s an exciting idea because we live in such a world of artifice.”

“It’s one of my favourite film sequences of all time,” adds stunt co-ordinator Wade Eastwood, “but what you don’t see is how much work went into it logistically.

“It started with our unit production manager, Tom Hayslip, fighting the battle to make sure we could even make this happen with a real A400. Then we had a legendary crew from Airbus who we convinced to do this. 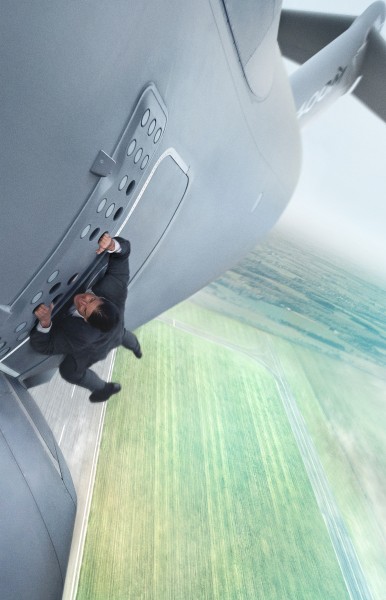 “From my side it started with doing a ton of drawings and pre-engineering work to get Airbus to trust that we wouldn’t damage their plane. Yet once we had their trust, it came off absolutely flawlessly.”

Key action scenes were filmed in central London. The team even filmed chase scenes in which Cruise slipped quietly into the real crowds around Piccadilly Circus, with filming continuing until the star was spotted and the local media started to close in.

“Mission: Impossible – Rogue Nation presented some unique challenges while filming in London and the boroughs have turned it around on every occasion," says location mananger Chris Moore.

"I do believe that Film London and the local film offices have helped the boroughs understand why filming is so important to this city.”

In Austria shooting focussed on the 19th century Vienna Opera House and a stunt that involved Cruise and co-star Rebecca Ferguson dropping 75 feet from the roof to the ground below in a controlled descent.

“I’ve been to Vienna many times and I always think it’s so beautiful and elegant,” said Cruise.

“I was excited to see the kind of romantic quality it could bring to this movie. We knew the Vienna Opera House was going to be a signature sequence.”

The Vienna Film Commission helped organise the shoot, with support from city authorities and a filming incentive worth EUR 750,000 from Film Location Austria.

From Austria the production then switched to Morocco for high-speed car and motorcycle chases that involved closing portions of the Casablanca-Agadir highway. The movie’s extensive shoot helped boost international production spending in Morocco last year.

“When you see the helicopter shot swooping in over Casablanca, your breath is just taken away,” commented executive producer Jake Myers: “The way the city is situated right on the water with all the towering minarets. And then you have these narrow, labyrinth-like streets and it was just amazing to see these BMW bikes zooming through them at high speeds.”

Added producer David Ellison: “We used rigs that have never before been used – and the result is you get the chance to truly see Tom racing on a motorcycle at top speed. There are no special effects.”