Georgia is preparing to launch a filming incentive in early 2016. Positioned on the intersection between Europe and Asia, the country is planning to offer a 20% rebate for international productions filming locally, but details of the required minimum spend have yet to be finalised. 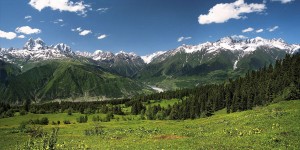 A British feature and TV pilot are among the shoots scheduled to take place in Georgia in the coming months, said David Vashadze, Head of Exports and Distribution at the Georgian National Film Center, in comments to Film New Europe.

“This shows that interest in filming in Georgia already exists,” Vashadze told the outlet: “We think that the ease of the financial side and the customer-oriented incentive scheme will increase the number of the foreign film productions significantly.

“There are many film production companies looking for new and very diverse territories. Low bureaucracy and a film-friendly atmosphere are very important, but without financial incentives the possibility of attracting [a] big number of foreign productions is not possible.”

The Caucasus region – named for the Caucasus Mountains – is not known as a popular international filming location, but this has the potential to change with the launch of a Georgian filming incentive.

Submarine thriller Black Sea was set in the region, but filmed largely at Pinewood Studios in London. Neighbouring Turkey scored a hit with the James Bond movie Skyfall, which filmed much of its opening sequence on location in Istanbul.

The sound stages of Eastern Europe are the closest competitors to Georgia, offering various filming incentives and skilled crew.