The producers of upcoming mountaineering drama Everest are promoting the real filming locations used in the movie. Based on the true story of climbers caught in a devastating avalanche in 1996, the film shot partly on location in Nepal and in the Italian Dolomites. 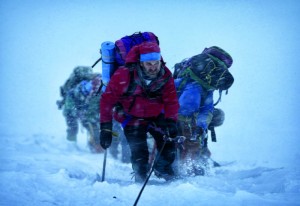 Location filming for Everest took place near the mountain’s real Base Camp in Nepal, while scenes closer to the peak itself were shot in the Italian Dolomites.

The Base Camp location was also built on a stage at Cinecitta Studios near Rome, with more than 60,000 tons of stone and rock brought into the studio to recreate the Nepal setting.

Italy has become a more popular shoot location for international productions since its filming incentives were boosted last year. James Bond movie Spectre recently filmed a key action sequence in Rome and a big-budget remake of the historical epic Ben-Hur has become the first international film in years to shoot entirely in the capital.

Everest is set to continue the trend of offering spectacular drama in real locations rather than using digital visual effects.

Several of the biggest movies of this year reveal a shunning of computer-generated imagery in favour of practical in-camera effects. Mad Max: Fury Road spent months filming complex stunt work on location in the deserts of Namibia, while the upcoming Star Wars sequel has heavily favoured physical set building, in stark contrast to the much-derided prequels of 15 years ago.