Michael Bay has been shooting true-life terrorism drama 13 Hours: The Secret Soldiers of Benghazi in Mosta in central Malta. The film tells the story of the American government’s Special Forces response to terrorist attacks on US compounds in the Libyan city Benghazi in 2012. 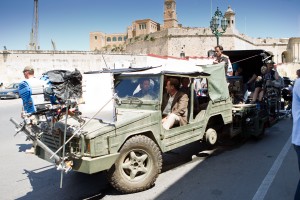 “Malta is experiencing one of the busiest years in its film industry,” said the country’s Film Commissioner Engelbert Grech.

“A film of this magnitude will most certainly boost Malta’s reputation as a film-friendly destination. Having a number of well-established filmmakers choosing Malta adds to Malta’s prestige in film servicing.”

Malta’s Mediterranean climate and historic architecture, as well as its base 25% filming incentive, make it a popular and secure stand-in for Middle East and North African filming locations. This has been particularly the case since the middle of last year when violence flared again across the Middle East region.

“It has been noted how Malta is becoming a ‘go-to’ location to stand in for Israel, with many location managers citing previous productions such as Munich and World War Z (above) as examples of Malta’s capability of offering both rural Middle-Eastern backdrops and developed Middle-Eastern cityscapes,” Grech told The Location Guide in a recent interview.

The country’s Mediterranean Film Studios offer world-class water tank facilities that is scheduled to be used next for the Luc Besson-produced war drama The Lake, an action thriller set during the Bosnian War of the mid-1990s.

Morocco is one of Malta’s main international rivals for well-serviced desert locations. New Mexico is hugely popular for American productions looking to remain in the US, offering studio facilities, a skilled crew base and generous filming incentives for both film and TV.