Nicole Kidman is filming a new Vogue photo shoot at the iconic Uluru – also referred to as Ayers Rock – in central Australia. Sydney is still the country’s main production hub, but films like San Andreas and Pirates of the Caribbean 5 have shot in Queensland. 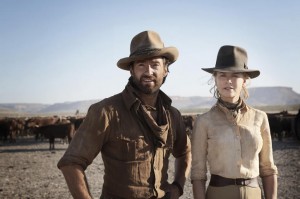 “Ms Kidman knows the Territory after filming parts of the movie Australia here and it’s wonderful to hear she is coming back for a photo shoot for a magazine that is read right across the world,” said Adam Giles, Chief Minister of Australia’s Northern Territory, in comments to News Corp.

“Uluru is a world-renowned site that is the spiritual heart of Australia and hopefully Ms Kidman’s visit will entice more tourists to visit the Territory and our unique attractions.”

Filmmaker Baz Luhrmann shot his epic romance Australia (above) back in 2007, which featured Kidman as an initially stuffy English aristocrat falling in love with Hugh Jackman’s rugged cattle drover.

The film also became a key element of an international marketing campaign for the Australian tourism industry, but the movie ended up underperforming at the global box-office.

San Andreas and Pirates of the Caribbean 5 have played a major role in boosting Australia’s international profile as a filming location. Johnny Depp’s adventure sequel is the largest production ever to shoot in the country.