American crime drama Banshee is counting the benefits of filming in Pennsylvania, with its first single-town base. The series previously shot in North Carolina where several different locations had to be used to create the show’s Pennsylvania setting. 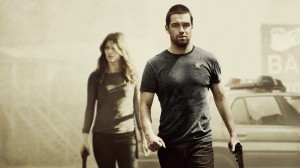 Banshee relocated earlier this year when North Carolina downgraded its filming incentive support, prompting a TV exodus. The change has enabled the production team to focus on one primary filming location.

“It's a financial decision that comes down from HBO,” said Jonathan Topper, co-creator and executive producer of the show, in an interview with Trib Total Media.

“Obviously, it has to work creatively. It's what makes financial sense. They're going to go where the rebates are.

“What was lucky about the way we shot the show was the aesthetic of the show was so tight that we didn't really do a lot of establishing, and because we shot in multiple towns when we were in Charlotte, we never really established a single town of Banshee. We have the opportunity now to really sort of inhabit a town and establish it, so we do.”

North Carolina downgraded its filming incentive in January and currently offers grants worth just USD 10 million annually, most of which was claimed this year by TV drama Under the Dome.