Written by Tom Deehan on Jul 30, 2015. Posted in Awards and Festivals / On Location

Netflix drama Bloodline has secured two Emmy nominations ahead of scheduled second season filming in the Florida Keys. The series tells a dark story of family secrets and has qualified for state support through Florida’s now defunct filming incentive. 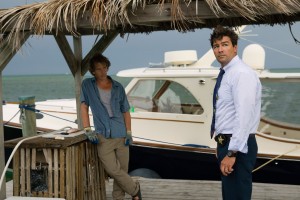 “We’re very proud of all the people in the Keys who have been on board, our film-friendly communities and the talented crew who got the job done. We are grateful and thrilled to have Bloodline set in and filming in the Florida Keys.”

Florida has had a filming incentive in place for the past few years but has lacked the money to fund it, so the state is largely unable to support new productions. Regional commissions have offered local incentives to high-profile shoots in recent months, but the sums involved are not enough to attract large productions for more than a few days.

Bloodline is clearly a welcome boost for Florida, but southern production in the US will remain focussed on nearby Georgia. Producers filming in Atlanta get a generous filming incentive, experienced crew and world-class studio facilities.

Marvel is currently filming Captain America: Civil War in Atlanta and will shoot Guardians of the Galaxy Vol 2 in the city after that.