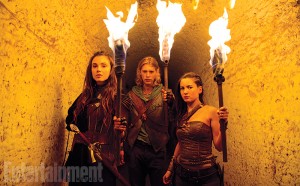 The Shannara Chronicles is based on a popular series of ‘high-fantasy’ novels by Terry Brooks. Filming was based at Auckland Film Studios and the show is scheduled for a January 2016 launch.

Producers showcased the first trailer for the far-future fantasy at Comic-Con in San Diego over the weekend and talked about the importance of the New Zealand filming locations.

“The talent that’s been assembled, the variety of locations, the beautiful backdrop of New Zealand - it really establishes the world of The Shannara Chronicles in a way that separates it from other genre tales,” says executive producer Jon Favreau in the trailer.

“We were delighted to help convince the producers to come to Auckland with a production that is worth tens of millions to our local economy,” said Michael Brook, manager of Screen Auckland.

“The project has employed more than 300 local crew and extras, and will add to our growing reputation as a screen production location.”

New Zealand’s film production industry is based in Wellington. Here, Disney is working on a remake of its 70s fantasy Pete’s Dragon and James Cameron will soon begin filming a trilogy of Avatar sequels.