Joshua Tree Films India shot a new campaign for Vodafone as a short documentary in a remote Indian village. The film promotes Vodafone’s money transfer service M-Pesa and focuses on umbrellas being given to women to ward off potential thieves when they collect their money. 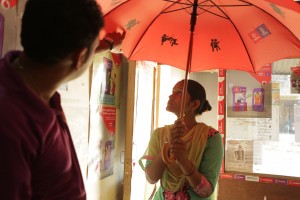 Many Indian men make the decision to move from their rural homes to find work in India’s larger towns and cities, but they usually have to leave their families behind.

Vodafone’s M-Pesa service enables husbands to transfer money back to their wives.

However, women are at risk from thieves as they return home with the money. Vodafone has responded by issuing umbrellas that can also potentially be used for self-defence, complete with pictorial references printed inside the umbrellas themselves.

A five-strong production team filmed with a Canon 5D camera partly in Mumbai and partly in a remote village near the town of Varanasi.

“We were just going to be part of the experience of how these women react upon receiving the umbrellas,” says Joshua Upputuru, an executive producer with Joshua Tree Films: “With no script whatsoever, all we were doing was sharing and documenting their natural reactions and of those around them.”

A lack of electricity in the village meant the production team was reliant on battery power and they even used their phones as additional lighting sources for after-dark scenes. Given that they were in a farming community, sound had to be recorded around the constant roar of nearby tractors and agricultural equipment.

“There were questions galore,” adds Upputuru, referring to the unusual sight of a film crew in the countryside: “While we were happy to answer were time consuming and took away from our filming time to an extent. On a positive note however, the local children were very keen to help.”