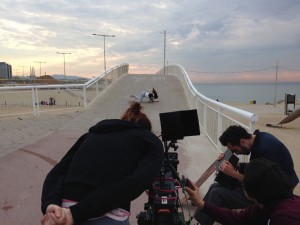 Kinopravda worked on the project with Excuse My French, Umbrella and PPM Film, and sought out visually-striking filming locations in each city.

“We did not want to let the viewer have a specific Eastern European or Mediterranean feel - rather to have a fresh yet familiar look,” explains Viktor Horváth, credited as the spot’s creator: “There was no actual scouting – we live in these cities with an open eye.

“We could afford to shoot approximately one hour in each location so there were no changes on the set. We did only a few hidden messages in post. Also it was crucial to choose locations close to each other so we could spend our time on shooting rather than travelling through the city.”

Barcelona is already a popular international filming location, particularly for commercials, and its appeal is likely to grow further when Spain’s new filming incentives become fully active. A promo for The Chemical Brothers’ new track Sometimes I Feel So Deserted has been one of the latest international projects to film in Spain, charting a surreal road chase drama in the deserts of Teruel.

Budapest remains a successful Eastern European production hub and in the last few months has hosted scenes for an adaptation of Dan Brown’s Inferno, starring Tom Hanks and directed by Ron Howard.