Production company MJZ built an Ikea kitchen set in the Costa Rican jungle for a new campaign for the Swedish furniture retailer. Wonderful Everyday features a menagerie of exotic animals playing around with the fully-furnished kitchen that appears in their jungle habitat. 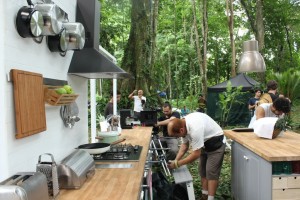 The kitchen set was built and filmed in a wildlife sanctuary on Costa Rica’s Caribbean coastline, a few hours’ drive from capital San José.

“We had a group of monkeys that could interact together on one set without any trouble on their interactions,” explains Gustavo Paris of service company LCA Productions.

“The production company wanted a sanctuary that took care of the monkeys in a very human manner - they do not live in cages and it is also a rescue centre. They are taken in if they are injured or nursing, and prepare them to be released back to nature.”

The animals were brought in ahead of the shoot to get used to the filming space. After this the team spent two days building the kitchen set and then the animals were let onto it.

“We set up a total of seven cameras on set from different angles and had the animals brought in by the handlers and the animal wranglers,” Paris adds: “We trained them in pre-production to make them be able to do some of the actions and had treats on specific places we wanted them to go to.”

Ikea has developed a reputation for exotic and creative international shoots in recent years. Last year the brand worked with MJZ on an ambitious Johannesburg shoot involving a woman tumbling across beds suspended in the clouds as she awoke in the morning.

The year before that, Ikea worked on an equally striking campaign where hundreds of electric lights were illuminated in a forest, this time in Portugal.