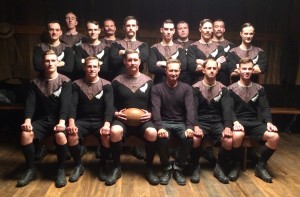 The 1905 team was away from their families for eight months, including six weeks spent sailing to Plymouth to compete in the first place.

Over the course of the competition they played 35 games and lost just one. One of their key victories was a 15-0 win against England.

“We ended up shooting in a wee studio in West Auckland,” says executive producer Mark Foster.

“Unfortunately travelling to the UK was beyond our means so director Adam Stevens worked closely with art director Chris Elliot to design our sets in a way that spoke of 1900s Britain.

“We used two sets, one for the changing room and one for the stadium tunnel. For the tunnel set we borrowed elements from turn of the century tube tunnels with their ceramic tiling, low ceilings and sparse lighting.

“With the changing room, Chris really delved in to the period detail, looking at the brick work, carpentry and ironwork on the changing room stands. It was custom built which meant we could really create the feeling of authenticity.”

After the sets were built and the fitted costumes made, the full campaign was lit and shot in just 13 hours.

“We built a beautiful set,” adds director Adam Stevens: “Chris Elliot the designer really pulled one out of the hat. We wanted to shoot the guys in an abstracted space, half changing-room and half bunker. This was all to be back-dropped by elements of authentic turn-of-the-century texture and plenty of black.

“The tunnel designs dipped into the classic London tube tunnel textures – simple and rounded. In the day the lighting was minimal, so the play of light and dark, combined with the graphic nature of the All Black jerseys, was a big part of the stylistic approach.”