Actor Jamie Bell has praised New Zealand’s production industry after new movie 6 Days, based on the true story of the Iranian Embassy siege in London in 1980. Funded partly by the New Zealand Film Commission, the movie shot scenes in Auckland before relocating to the UK. 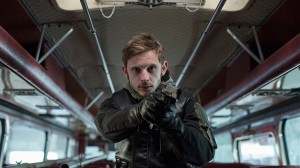 Armed men took dozens of hostages at the Iranian Embassy in London in the spring of 1980 and a six-day siege culminated in an SAS raid on the Kensington building.

News footage of a soldier taking cover from an explosion on the Embassy balcony became an iconic image of the standoff.

The production team for 6 Days reportedly filmed interiors in Auckland and then relocated to shoot exteriors in London.

“I love filming in New Zealand,” Bell told the NZ Herald: “I've worked down there a couple of times with Peter Jackson [on the 2005 remake of King Kong] and a few different things.

“The great thing about working in New Zealand is that they have great crews. They have those crews that rival crews from anywhere else in the world, I think. Everyone from every kind of department is very, very talented and some of the best in the world, especially at visual effects.”