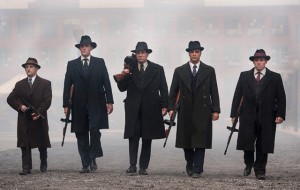 The Making of the Mob: Chicago will focus on the rise and fall of notorious gangster Al Capone against the backdrop of the city’s criminal underworld in the mid-20th century.

Filming for the first series took place in West Virginia, despite the New York setting, and was produced by Stephen David Entertainment.

“We’ve had an amazing experience with AMC on The Making of the Mob: New York and to get to explore a second season focusing on Al Capone and Chicago is a dream,” said Stephen David, president of Stephen David Entertainment.

Robert Redford is an executive producer on The West, which will focus on iconic Western characters like Jesse James, Wyatt Earp and Crazy Horse.

“We are extremely excited to get a chance to partner with AMC, Laura Michalchyshyn and Robert Redford on The West,” David added: “It’s a 25-year period after the Civil War that’s filled with iconic names, all connected through a larger story that’s never been told before in this way.”

Commented Redford: “We are pleased to partner with Stephen David and AMC for the production of The West, which will transport audiences back to the days of the Wild West to meet the famous outlaws and lawmen that shaped American history and culture.

“This series is an opportunity to revisit an era of memorable events that were part of making the United States what it is today.”

Stephen David has a history of filming docudramas on location in West Virginia. AMC has experience with Western dramas, having shot Hell on Wheels on location in Calgary, doubling the Canadian city for the American Mid-West.