The BBC is filming a second of popular police drama Happy Valley on location in Yorkshire in northern England. Set in the Calder Valley, the series follows police officers faced with a possible serial killer. 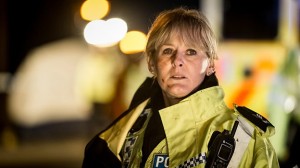 Happy Valley’s first series was a huge hit for the BBC, attracting overnight audiences of nearly six million each week.

“I am thrilled to be embarking on a second series,” said writer and executive producer Sally Wainwright: “We were delighted and overwhelmed with the viewers’ response to series one and it’s clear that there’s a huge appetite to see more of the characters and drama among the TV-viewing public.”

Added Nicola Shindler, founder of RED Production Company and an executive producer on the drama: “Sally created a truly magnificent series with very real, complex characters, an engaging plot and breathtaking storylines. I am delighted and excited to be delving deeper into Catherine’s (the protagonist) world in series two.”

Yorkshire is a very popular UK filming location, partly because of the Yorkshire Content Fund, which is the largest regional fund in Britain. Recent BBC productions shot in the area have included the fantasy miniseries Jonathan Strange and Mr Norrell, and the smuggling drama Jamaica Inn.

Screen Yorkshire has responded to the region’s growing popularity by announcing the creation of Yorkshire Studios, which is set to adapt the hangars of a former RAF base.

“The opening of Yorkshire Studios is a significant landmark for the UK film and TV industry,” said Sally Joynson, chief executive of Screen Yorkshire, when the development was first announced in June.