New Netflix drama The Crown plans to film scenes at Ely Cathedral in Cambridgeshire. The series spans decades of the reign of Queen Elizabeth II from 1952 and is inspired by Peter Morgan’s play The Audience which featured Helen Mirren as the monarch. 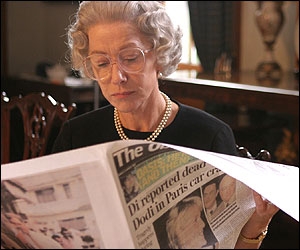 “The purpose of this is to allow filming of a period nature (1950s) without modern cars passing in the background,” Location Manager Chris Johnston told the outlet.

“The stop periods will be for a maximum of two minutes when filming is taking place and then traffic will be allowed to flow normally.”

Helen Mirren starred in 2006 movie The Queen (above) – also written by Morgan – which focussed on how the Royal Family responded to the death of Princess Diana in 1997. Mirren returned to the role again on stage for The Audience, which was inspired by the Queen’s weekly audiences with successive Prime Ministers over the decades.

Several different as-yet-unannounced actresses will play the Queen in The Crown, portraying the monarch in different periods of her life.

“So much of what we do is only possible with the co-operation of local residents and we hope we can demonstrate to you that, despite the increased activity in the area, the filming can be carried out in a professional and courteous manner,” Johnston added.

Ely Cathedral has hosted several other high-profile productions in recent years, including The King’s Speech and Elizabeth: The Golden Age.