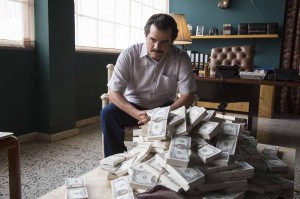 Pablo Escobar gained international notoriety by dominating the global cocaine trade throughout the late 1970s and 1980s. Escobar became a billionaire and his brutality extended to political assassinations and even an airline bombing.

Narcos comes from filmmaker José Padilha and is based on the accounts of the Drug Enforcement Agency’s Steve Murphy and his Mexican partner Javier Peña. Netflix worked in Bogota with Colombian production service company Dynamo.

“It was basically the most difficult thing I have ever done, in my life, because I didn’t speak Spanish before doing the show,” Moura told Collider of his work on Narcos.

“I flew to Medellín and stayed there six months before the rest of the cast and before I even signed with Netflix. I booked myself in a university for a Spanish course for foreigners, and I think I’ve read basically everything that was written about Pablo Escobar and modern Colombian history.”

Colombia’s filming incentive has helped boost the country’s international profile. Mining drama The 33 was the first foreign feature to use in the incentive and jungle adventure movie Lost City of Z will film locally in the next few weeks.