Markenfilm recruited Formula One World Champion Lewis Hamilton as one of their famous faces for a new Mercedes-Benz spot that filmed in Spain and Portugal. Inspiration follows a group of high-profile individuals putting Mercedes Benz SUVs through their paces.

The shoot was divided into three stages that were planned around the availability of Hamilton, surfer Garrett McNamara, show-jumping champion Meredith Michaels-Beerbaum, supermodel Petra Nemcova and explorer Mike Horn.

“We wanted magic hour light for scenes with Mike Horn which meant bringing in all the equipment in the night. With the help of mountain guides pre-marking the trails, we got everything onto location in time to witness and film an unforgettable sunrise.” 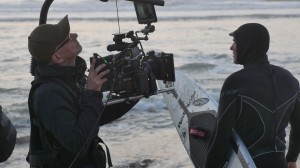 The production team went two hours south to Nazare to film with surfer McNamara, choosing the location partly because that was where he set a record with his big-wave surf. Local councils provided a beach as a controlled filming location and three fire services provided water for rain effects.

Scenes involving show-jumper Michaels were filmed on a private property in the forested region of Sintra. The horses were brought in three days before the shoot to get used to the environment and rehearse some of the specific moves needed.

“Being in a private location gave us total control of the area for filming the driving scenes with Russian Arm,” Roycroft adds: “Given the limited time we had with celebrities, keeping everything within one controlled location was a huge help in maximising the filming time.”

The team headed to Spain to find the winding road for Hamilton’s scenes, the urban locations for Nemcova and the salt lake desert for the climactic shots of all the SUVs driving together.

“Some of the most memorable shots were captured by drone which was operated by the brilliant Dedicam team, and it was straightforward arranging the necessary flight permits in all the locations,” Roycroft concludes.