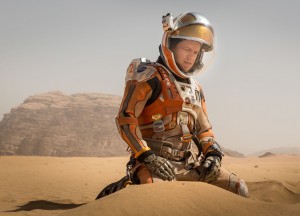 An immense green screen was wrapped around the stage to accommodate background plates of Wadi Rum in Jordan, which doubled for the broader Martian surface in panoramic views.

Scott chose to film the opening sandstorm on his Mars set with practical effects and spent three days using giant fans to bombard his cast with sand and dirt.

Dozens of additional sets were built on Korda’s five other stages, including a Mission Control Room, from where NASA tries to co-ordinate a mission to rescue Watney. Numerous locations were also found at a development called the Hungarian Expo, and in a modern Budapest event building called The Whale that sits on the banks of the Danube. The Budapest shoot was serviced by Mid Atlantic Films.

“It’s a geodesic structure with enormous scale, loads of glass and concrete, and wonderful louvered blinds that open and close with motors,” said production designer Arthur Max of The Whale building.

“We can fully control the light levels. This building was a godsend. It would cost a fortune to construct a composite of sets like these on a soundstage.”

Limited filming took place at Wadi Rum in Jordan for the studio plate shots, marking the first major international feature production in several years to shoot in the country.

“We had scouted the Australian Outback as a possible landscape for the Martian surface,” said producer Mark Huffam: “That didn’t work out and we decided to shoot most of the Martian sequences as interiors, giving us greater control of the environment, and then matching those with exteriors at Wadi Rum.”