A remake of classic western The Magnificent Seven is filming on location in New Mexico. The original movie was released in 1960 – itself a remake of Japanese masterpiece Seven Samurai – and the film quickly became an enduring cornerstone of the western genre. 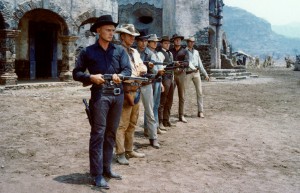 Back in the late 90s the story was rebooted as a short-lived TV series that was shot in Arizona and California. The remake of the original movie is using New Mexico’s generous filming incentives. A star cast is being led by Denzel Washington, Chris Pratt and Ethan Hawke.

The western theme has continued in New Mexico with the TV pilot for Edge, a recently-wrapped drama set in 1868 that has a story by star screenwriter Shane Black.

“The fact that New Mexico has so many varied western locations makes it impossible not to film a western here. While shooting the Edge pilot, we were able to film western towns, homesteads, rivers, mountains, long winding trails, ranches, and beautiful valleys.

“We could not have possibly shot as many varied locations anyplace else on earth. Thank you New Mexico Film Office for all of your help!”