The Production Guild of Great Britain has recognised the UK team behind 24: Live Another Day at its 2015 awards ceremony. Iain Smith, a producer and chairman of the British Film Commission, and his team took the award for Production Guild Member/Team of the Year. 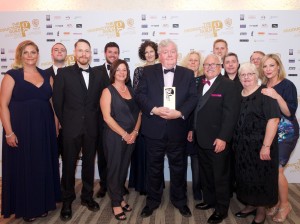 The drama series filmed mainly in London in the first half of 2014 and built an adapted studio facility in the capital’s Gillette building.

“We had a spectacular experience shooting 24: Live Another Day in London, and could not have been more pleased or impressed with our UK production team led by Iain Smith,” Bruce Margolis, Senior Vice President of Production at Twentieth Century Fox Television.

“24 is by its very nature a tremendously challenging series to film and it was further complicated by the fact that we were bringing this show back years after we ended production in Los Angeles, with the eyes of the world upon us.

“By every measure, thanks to our talented team overseas, we pulled it off, and we are so grateful for their incredible contribution to the legacy of this series.”

The Production Guild Awards were sponsored by Warner Bros. Studios Leavesden and took place at The Grove in Hertfordshire.