The BBC’s new TV movie adaptation of classic novel Lady Chatterley’s Lover was shot in Wales. Merthyr Mawr House and Estate in Bridgend, between Swansea and Cardiff in South Wales, were the principal filming locations. 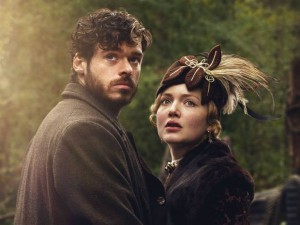 “As Hartswood Films have had an established office in Cardiff for a number of years, we therefore look to shoot in Wales as much as we can as the subject dictates,” said Hartswood’s Beryl Vertue.

“Penny Skuse (of Wales Screen) was very helpful at the beginning in taking me around and helping me decide whether Wales was the right place to shoot Lady Chatterley’s Lover, bearing in mind the original story is set in the Midlands.

“I was very impressed with what she was able to show me, and therefore invited the Writer/Director Jed Mercurio and the Producer Serena Cullen to come and see the various locations, which ultimately helped us to decide to shoot in Wales.”

South Wales is steadily building on its popularity as an international filming location. The successful US fantasy drama Da Vinci’s Demons recently came to an end in the Swansea area, but new historical series The Bastard Executioner – from Sons of Anarchy creator Kurt Sutter – is now filming a full season from its base at Dragon Studios.

Last week US company Fox 21 Television Studios finalised a long-term lease on Dragon Studios, which could help rejuvenate the facility. Pinewood Studios already has a presence in Cardiff.

Lady Chatterley’s Lover is available on BBC iPlayer throughout September.