Prohibition drama Boardwalk Empire has ended after its fifth season, and has been rewarded with ten Emmy nominations. Set in Atlantic City in the 1920s and 30s, the series tells a story of gangsters and political corruption. New York doubled for Cuba in its final season. 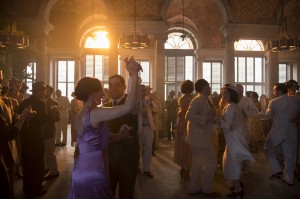 The show recreated Atlantic City in New York’s Steiner Studios throughout its run, but the producers considered moving further afield for the Cuba story settings needed in the fifth season.

“I would say season five was the most challenging because we opened the season with Cuba,” says production designer Bill Groom in an interview with TheCredits.org.

The production team was able to find architecture in New York that was a close approximation to Cuban locations. Considerable set construction was still needed for the locations to be convincing. The Manhattan Municipal Building near City Hall became a key location, as did the Hispanic Society museum further north.

“It’s not a very well known museum in the city, and part of the complex is this huge plaza that has a fountain and a sculpture,” Groom continued: “With the help of visual effects, we were able to put the old cars in places that we’d never be able to. Then we just went to work creating the look of Havana, and it just so happened that the buildings surrounding the plaza were perfect for Cuba. 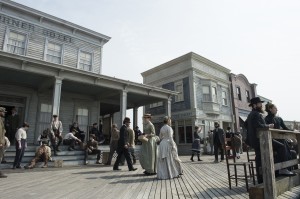 “We brought in a dozen palm trees that were a combination of trunks that were sculpted from trees sourced in Los Angeles and then live palm fronds we had shipped in from Florida.

“We had the palm fronds moving in the breeze, which added a lot to the feeling. A lot of people who were insiders in the business were scratching their heads on how we did that.”

For the final season, the production team built additional sections of their boardwalk set as the story flashes between 1868, 1897 and 1931, with the boardwalk at different stages of construction in each timeframe. The final set was nearly 800 feet long and offered the different period aesthetics.

Groom has an Emmy nomination this year for his work on Boardwalk Empire. The award ceremony itself is on 20 September 2015.