Written by Tom Deehan on Oct 30, 2015. Posted in Production News

The second season of HBO’s comedy series Ballers starring Dwayne Johnson, has begun filming in the city of Miami.

The series follows the exploits of Spencer Strasmore, a retired NFL player now operating as a financial manager, surrounded by wealth and glamour similar to that found in HBO’s Entourage. 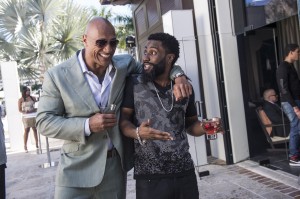 News emerged that the second season had begun filming when Miami Talent Casting posted a call for extras through their Facebook page, whilst the Miami-Dade County Department of Regulatory & Economic Resources’ Office of Film and Entertainment publicised the issuing of film permits which include Crandon Park Tennis Centre as a requested filming location.

The initial decision to film in Miami was a result of Florida’s tax incentives. In May 2014 Miami-Dade County Film Commissioner Sandy Lighterman explained: “fortunately, Ballers was able to secure incentive funds that had been earmarked for shows that ended... If that had not been the case, the show likely would have gone to a state like Georgia or Louisiana, which has a reliable and attractive incentive programme.”

Florida previously offered up to 30% tax credits but also featured various bonuses such an extra 5% for family friendly productions, or an additional 5% to a production that filmed in an underutilised region of the state. The issue with this system however is that all of the available funds have already been allocated, with Ballers being one of the last few productions to secure these incentives. Filmmakers are currently trying to secure funding for a new incentive scheme altogether.