London-based production service company MADAM have produced a new commercial for Marriott Rewards, which showcases one of the most frequently visited places in London, Kings Cross St. Pancras.

Home to the Renaissance Hotel and Platform 9 and ¾ (which still attracts massive crowds even to this day), Kings Cross is a hub of activity within Central London, and proved to be an ideal filming location for MADAM’s recent project.

In describing the benefits on filming in such a central location, Michelle Stapleton explained, “London has a great film office so they can provide quick and detailed responses to your enquiries and indeed provide you with fast turnaround permits. There is an amazing amount of different interesting buildings and streets in London, and an amazing amount of diverse looks within a really confined area, the general public are very used to seeing camera crews so setting up shots within working spaces and environments is relatively easy”. 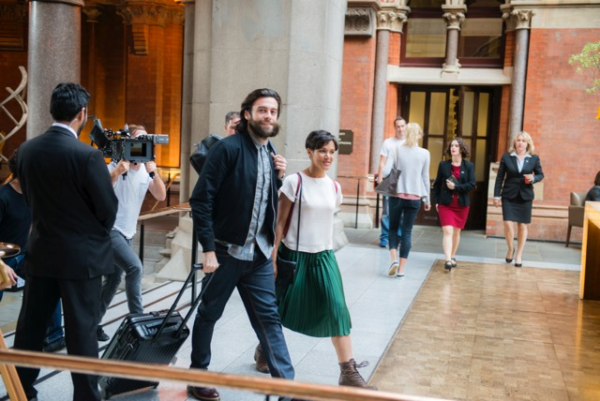 Michelle continues, “we filmed in the Renaissance Hotel over 2 days while it was still obviously open to the public and all of its guests. One of the scenes was shot on the Grand Staircase which is famous for one of the first Spice Girls music videos!”.

The commercial itself depicts a young couple as they enjoy a stay at the iconic Renaissance Hotel, showcasing the decor, as well as the food and drink served at the hotel. The couple are later treated with VIP tickets to a concert through the Marriott Rewards service.

The concert that the couple attend was not simply staged however, as a band was called in to perform for a select audience. Michelle adds, “the planning of the live concert came about as we wanted to really create something real rather than staged.  We reached out to a band that our Production Manager knew and they “The Thirst” are a young group based in London who are just really starting out and who have already got a great fan base”.