Production service company LS Productions recently took to the famous Strathisla Distillery in Edinburgh to film a commercial for Chivas Regal’s Japanese inspired whiskey ‘Mizunara’. With one of its head offices based in Edinburgh, LS Productions were tasked with bringing together themes of East and West, and managed to complete the shoot in two days. 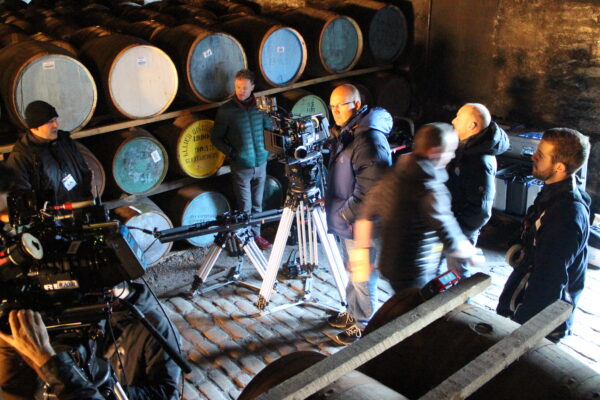 The commercial stars ex-sumo Takanohana Oyakata as he visits the distillery to talk to Colin Scott, a Master Blender at Chivas. The two discuss their respective field of work and the art of cultural preservation as they enjoy a glass of the new limited edition whiskey.

Amy Morement, Location Manager at LS Productions explains: “finding a bar that appealed to the Japanese whiskey market was crucial. We completed a lot of research into how the culture of whiskey here in Scotland translates. We used this research to inform our scout for the ideal bar and searched Aberdeenshire high and low for a location that was just right.”

Wendy Isaac, Producer at LS Productions, adds: “The second day of shooting was at Strathisla Distillery, where Mizunara whiskey is made. Health and Safety is of paramount importance at distilleries, especially with the potential for flammable liquids.  Working closely with the staff we prepared all necessary plans weeks in advance so every department could comment and ultimately provide approval. Four members of crew undertook training before filming could even begin. With our working knowledge of the health and safety protocol and great relationships with staff, crew and client, we ensured the day ran smoothly.”

Despite a lack of filming incentives on offer for commercials shot in the UK, the country still offers a film friendly atmosphere and a variety of unique locations. LS Productions recently collaborated with Trigger Happy Productions to film a commercial in the Isle of Skye for the price comparison site, KAYAK.