Written by Tom Deehan on Feb 29, 2016. Posted in Awards and Festivals / General Interest

After being nominated on six separate occasions, Leonardo DiCaprio has finally won his first Oscar for his portrayal of Hugh Glass in Alejandro G. Iñárritu’s survival epic The Revenant, which was filmed on location in Alberta and Tierra del Fuego.

As part of his acceptance speech, DiCaprio raised the issue of climate change and noted that the production needed to move to Argentina due to a lack of snow in Canada. 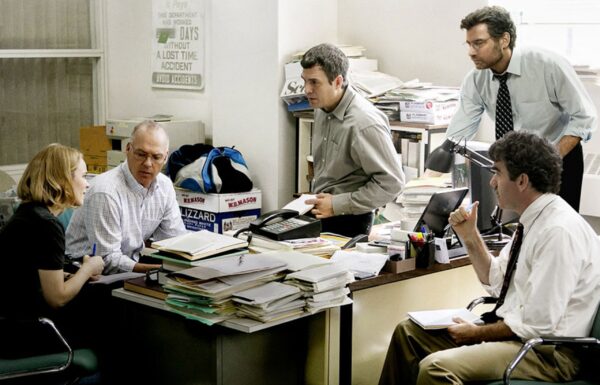 In a surprise win, the biographical drama Spotlight (pictured right) was deemed Best Picture, an award that many industry analysts had believed would go to either The Revenant or George Miller’s Mad Max: Fury Road. Spotlight details the Pulitzer Prize winning investigation carried out by The Boston Globe in uncovering the Catholic Church abuse scandal. The film was shot on location and at Pinewood Studios in Ontario.

Despite earning over USD2 billion worldwide and becoming the third highest grossing film of all time, Star Wars: The Force Awakens came away empty handed, most notably in the category for Visual Effects which was awarded to the independent science fiction film, Ex Machina. The upcoming sequel to the Force Awakens is currently being filmed in Croatia.

Mark Rylance, although better known amongst British audiences for his portrayal of Thomas Cromwell in BBC’s Wolf Hall defied expectations by being awarded Best Supporting Actor for his role as the Soviet agent Rudolf Abel in Bridge of Spies. Production Executive Markus Bensch recently explained to TLG the creative process behind sourcing the locations for Bridge of Spies in Berlin and Wroclaw.

Predictions were met however with the actress categories, as Brie Larson received Best Actress and Alicia Vikander received Best Supporting Actress for their roles in Room and The Danish Girl respectively.

Mad Max: Fury Road proved to be the most successful film of the show, walking away with a total of six awards including Best Sound Editing and Production Design. The production originally intended to film in New South Wales, but due to harsh weather conditions they opted for Namibia instead.

The Academy Awards has received much criticism due to the lack of minority talent being present in the nominations. The only film with a predominantly African-American cast to be nominated, Straight Outta Compton, failed to secure the award for Best Original Screenplay.