Location Manager and founder of the zlocationz Production Compmany, Martin Zillger has seen his fair  share of high profile projects. Operating mainly out of Germany and Austria, Martin has recently worked on Amazon’s original series The Man in the High Castle and feature film Race starring Jason Sudeikis. Martin was generous enough to speak with TLG to share his location expertise and insight. 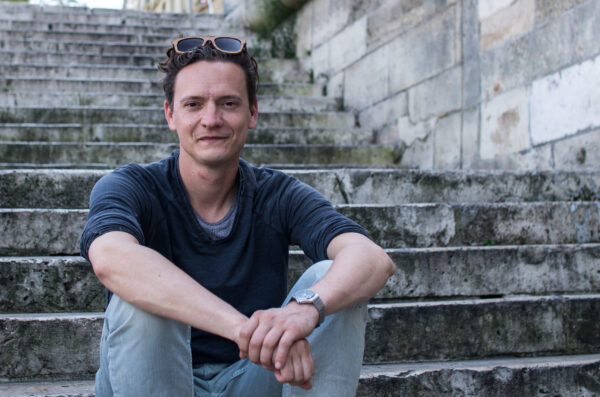 How long have you been working as a Location Manager, and how did you get into the industry?

I started in 2005 as a Location Manager so it has been more the 10 years already. Before that I went through various positions on film sets. I have worked as a driver, set manager, base manager, unit manager, production secretary, even as a sound assistant to gather as much experience from different departments as I could.

That got me into Location Scouting in 2002 because I could use my knowledge of on set organisation to find ideal locations that could operate as a film set. Location Management now combines all of my skills and experiences into one position.

One of your latest projects, Amazon’s The Man in the High Castle required a shoot at Berlin’s Victory Column and the Olympic Bell Tower. Can you detail the process in securing and filming at these locations?

Both locations have been challenging in different matters. The scene at the Victory Column demanded a full lockdown of five main roads in Berlin as well as a detailed rerouting plan of all affected traffic. Plus there were six bus lines circling the area that we tried to lock-down so we needed a plan to integrate the frequency of the buses into our shooting schedule because we didn't have the clearance to block bus routes.

The funny thing here was that no authority in Berlin could tell us the exact frequency of the buses crossing the Victory Monument. We ended up checking all bus schedules manually with pen and paper, to figure out the bus frequency and work that into the shooting schedule. We pretty much had windows of around five minutes for each take which included a 30m camera crane as well as 50 extras and 30 pictures vehicles.

Thanks to the very professional crew in all departments and the support of the Medienboard Berlin everything worked like a charm on the day of filming. We even finished filming 20 minutes before we lost the lock-down. 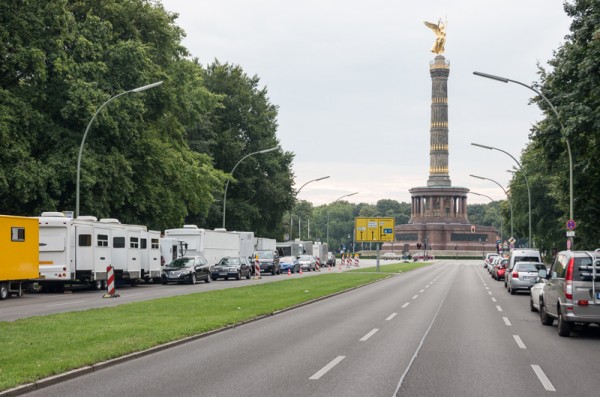 At the Olympic Bell Tower we shot the final scene of the first season and had to dress the historic structure as Hitler‘s secret underground cinema which demanded a full set to be built inside the location. The challenge here was that the Bell Tower was still open to the public during the preparation of the set. We had to guarantee the city of Berlin that we wouldn‘t show any Nazi symbols to the public during the prep, so we stored all forbidden props into a small storage room inside the location and moved it out during the night before the shoot.

We built light rigs around the windows of the Bell Tower and lit the set up like a scene from Blade Runner. Combined with the beautiful set decoration from Bernhard Henrich, the set gave everyone goosebumps when stepping into it.

One thing that surprised us was the charming nature of the cashier working in the Bell Tower, who was with us the whole time during prep and filming whilst giving out free coffee to the whole crew. She enjoyed the intense working athmospere and quickly became an extra crew member. She actually saved the whole production at one point because the authorities came by to check on our permits and at this exact moment, someone left the door open to our secret storage chamber.

Luckily the cashier charmed the police away with her free coffee and I was able to close that door in time.

Another project had you scouting the Austrian mountains. Can you elaborate on that production?

My company zlocationz has worked for Fabulous Magazine for a very long time now. Since we have a long lasting relationship, we have a degree of artistic freedom when scouting. We got a briefing for the Black Forest region in Germany but after looking at it, I recommended shooting in Austria instead because it just felt more fitting. Since I had done four productions and scouting in Austria already, I knew where to find beautiful landscapes, snow in Autumn and lonely mountain cabins. The scouting process here was absolutely stunning and so much fun. My client accepted all scouted locations after two days of scouting and even added another shooting day because of the beauty of the locations.

In the Austrian mountains you obtain permits by handshakes, not by emails. After I found the locations I had to explain to my client that I needed to go there in person again to get the permits, which of course was not budgeted. It took me four days and a lot of Schnapps in meetings with the locals to secure all the locations. 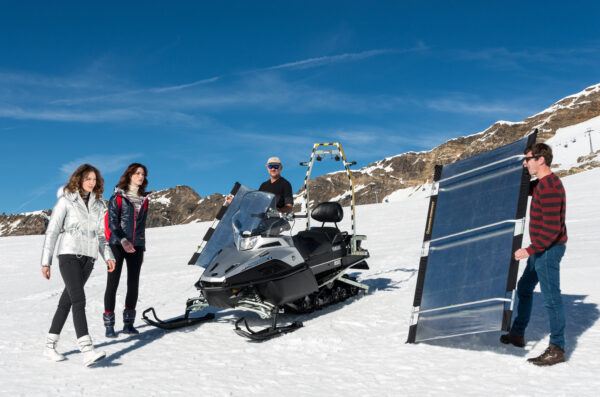 I got a permit by handshake from a Mayor of a small town. During shooting, a police car stopped and asked for my permit. I told them that I got it by handshake from the mayor and shook the policeman's hand. Suddenly they laughed because it was kind of a running joke in this village that the mayor likes to shake hands and they just wanted to stop by to see how we are doing and if we need some help carrying our equipment.

Overall I can highly recommend filming in Austria. The locations are beautiful, the people very open and authorities, like the Cine Tirol, very supportive.

What future productions do you have lined up?

At the moment I am working on a documentary about the last days of the fall of Berlin during the Second World War. This project has taken me to all the historical locations of Nazi architecture in Berlin. The great thing on working on documentaries is that that they open doors to locations which are normally sealed to filming.

After that I will go to Portugal for another shoot with Fabulous Magazine. I am really looking forward to this project because I had the artistic freedom again to scout stunning locations which will mostly be deserted beaches, landscapes and tiny villages.

Have you come across any major technical challenges in recent years?

I try to use all advantages of technology for my scouting and location management. We use cloud services, gps trackers, professional dslr gear, boats or jeeps if needed to find locations. At the moment we are considering learning to fly drones as well because they offer a lot of new opportunities for scouting and filming.

However, I also like to keep things basic and not to get stuck into too much digital communication. Many times it‘s still better to do business on a personal level, so I like to go there in person and meet location owners, authorities, directors and producers to talk things through eye to eye. When planning locations a lot of things can happen and change all the time, from my experience direct contact with everyone involved helps a lot in those stages. 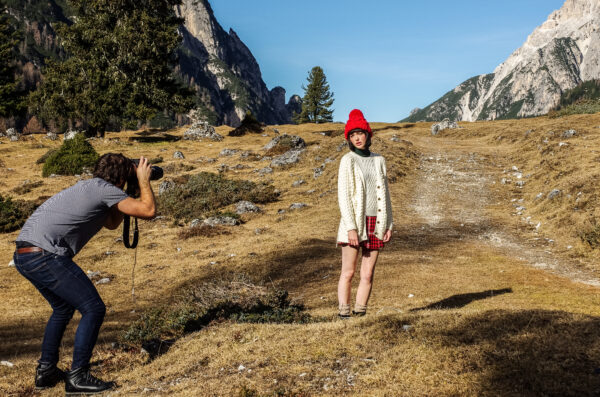 What are your favourite German/Austrian locations?

The beauty of Berlin lies in the variety of locations. The city offers modern architecture, broken backyards, riverside locations, city views and iconic locations. In Germany I really adore the vast wilderness of North Brandenburg. The region offer endless pine forrests, beautiful lakes and rivers and sadly (or luckily) doesn’t receive too much attention.

In Austria I really admire the region of Tirol. It offers picturesque mountains roads and isolated glaciers. I think in the end that‘s what makes the process of Location Scouting & Location Management so rewarding because ideally the location becomes a character in the movie and not just part of the background.