Filming Myanmar (Burma): A great overland journey back in time

I recently wrapped up a 10-day shoot in Myanmar for NDTV (New Delhi Television in India), it is one of the greatest overland adventures I have ever had. Proudly sponsored by Mercedes Benz; two cars traversed the world in 352 days, 44,474km crossed five continents and 26 countries. 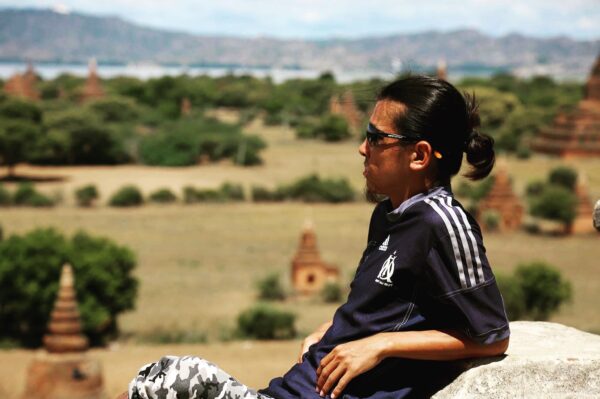 Myanmar is the last country to cross before the two cars arrive back home to where they were born. It is time to share with those who are planning a shoot in this beautifully unspoiled country, my experiences with these locations.

Myanmar (formerly Burma), is the largest country by geographical area in mainland Southeast Asia, a nation of more than 100 ethnic groups, bordering India, Bangladesh, China, Laos and Thailand. If you consider all the various islands of Indonesia, Myanmar is the second largest country in Southeast Asia. Myanmar contains about 676,000 square kilometers (that’s 261,000 square miles) of land. Let’s look at Myanmar in another way; by comparing it to the size of other countries: Myanmar is roughly the same size of Italy and Germany combined. Think of that: Venice, Rome, Berlin, Heidelberg, all in one country.

You might have heard of the 1991 Nobel Peace Prize winner, Mrs. Aung San Suu Kyi - the symbol of Myanmar’s modern freedom, or seen her portrayal in Luc Besson's film The Lady in 2011. Either way, the whole world has been eying this country recently thanks to its ever-changing political situation but to really get inside of Myanmar and film is another story. Myanmar is one of the most magical and undiscovered destinations in the world; a golden land of breathtaking beauty and endless charm that is steeped in fascinating history, traditions and of course, war. Undoubtedly, many filmmakers across the globe have tirelessly attempted to shoot in this dream location but there have been so many obstacles stopping some of their projects from going ahead; one such issue is the ongoing and lengthy procedure of trying to get film permits approved. Others might have been turned away over budgetary reasons; it’s not cheap to carry out a production in Myanmar.

Mawlamyine, we crossed the Thai border at Mae Sot to start our overland journey throughout Myanmar. Our first city to stop for the night is Mawlamyine, the capital of Mon State. The town’s signature landmark is Kyaikthanlan pagoda built in 875 AD which is said to be the place that inspired Rudyard Kipling's famous poem: The Road to Mandalay. Early in the next morning we left for Yangon.

Yangon (the former the capital city and known as Rangoon), the country's largest city, is a mixture of colonial buildings, bustling markets, old buses and taxis, and the gilded Shwedagon Pagoda which contains Buddhist relics dating back to the sixth century. Unlike any other city in Southeast Asia, motorbikes are prohibited unless they are being used to transport your crew and equipment around in the city. 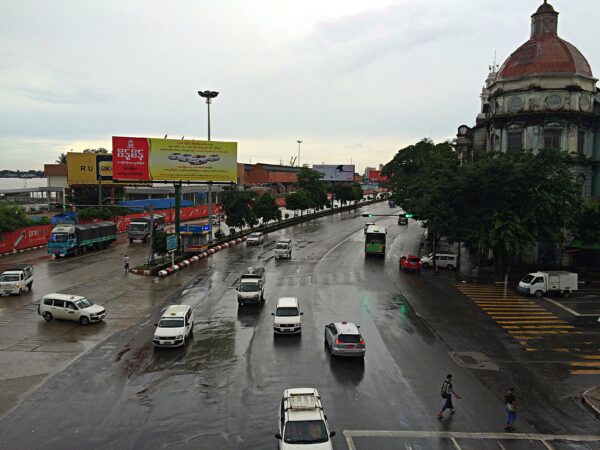 Traffic rules seem to be unorganized especially since the Government decided to change it from British rule (left-hand to right-hand) but 90% of vehicles here still have steering wheels on the right-hand side. That would be unexceptional if not for the fact that most of the time, the roads themselves run in the opposite manner, meaning that cars are on the right side of the road but the steering wheels, and hence the drivers, are also on the right with a better view of the curb rather than the traffic. Make sure you’re ready for this and ensure to add at least an hour extra in your shooting schedule to cover the traffic in this city.

Watching the sunrise over the Valley of Temples is the experience of a lifetime.

Nay Pyi Taw: empty streets, empty shopping malls, empty hotels and resorts and the empty 20 lane boulevards are among the most unusual things that we first explored in this recently reallocated capital city. The capital's official name was announced on 27 March 2006, on Myanmar’s Armed Forces Day. It first became the capital of Myanmar in 2006, after the government decided to move the capital from Yangon with minimal explanation and caused worldwide controversy. There’s nothing much to see and do in this city unless you really need to use the current capital city of Myanmar.

Bagan - “The Valley of Temples”. After five hours of overland driving (270km) from Nay Pyi Taw, we reached Bagan; the archaeological zone. Bagan (formerly known as Pagan) was the capital of the Kingdom of Pagan from the 9th to the 13th century. This kingdom was the first to unify the area that is now Myanmar, establishing the Burmese culture and ethnicity, as well as Theravada Buddhism, in the region.

Over this period of rule, as the city and kingdom grew in influence and stature, over 10,000 temples were built on the plains surrounding the capital next to the Irrawaddy River. After the fall of the Kingdom of Pagan, the city was reduced to a small settlement, never to recover its former glories. The area did, however, remain a destination for Buddhist pilgrimage. A few hundred temples were added between the 13th and 20th centuries, but the huge amount of earthquake damage over the years means that only 2,200 temples remained, in varying states of repair.

Hot air balloon is the best way to admire the astounding beauty of this valley though it’s only in operation from early October until end of March. Set your alarm and head out into the valley before dawn. Watching the sunrise over the Valley of Temples is the experience of a lifetime. 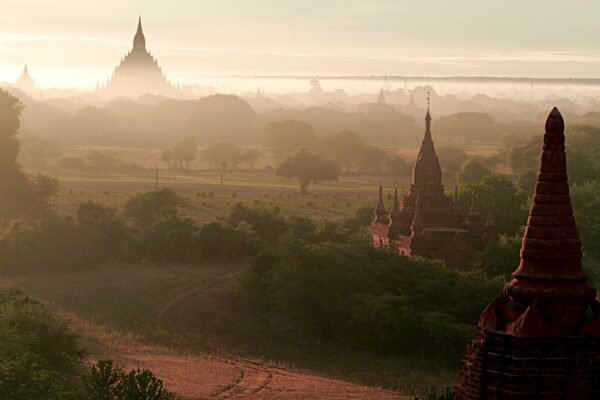 Mandalay, established in 1857 is the second largest city in Myanmar. It’s the former royal capital set on the Irrawady river bank. The city is the economic and religious hub of upper Myanmar and is centred around the Royal Palace. It has wide lanes filled with bicycles and motorcycles and is known for its cultural diversity. Half of Burma's monks reside in Mandalay and the surrounding areas. Shwenandaw Monastery is made entirely out of teak wood with beautiful intricate carvings. It is the only major building from the original wooden royal palace to have survived the bombing during the Second World War, and so it is the only authentic part of the Royal Palace which can still be seen today.

You can’t miss the U-Bein bridge, constructed in 1850 and is believed to be the world’s oldest and longest teakwood bridge (1.2km long). Mandalay is also famous for its culture and amongst the most well-known of its residents are the Moustache Brothers, a comedy troupe who have been sticking their fingers up to the ruling generals for years. They have been sporadically jailed and put under house arrest, and it is in this house that they perform their show on most evenings from 8.30pm, lasting for almost an hour.

There are few ATMs in Myanmar, so visitors need to bring plenty of U.S. dollars in cash.

Inle Lake is located in the heart of the Shan Plateau. This beautiful highland lake is 900 meters above sea level, 22km long and 10km across. The lake is inhabited by people of many different ethnic nationalities. The Intha people are the lake dwellers who are unique for their one-legged rowing. Traditional one-legged rowing boats are the main ceremonial attractions of the Inle Lake.

A good sign for those who are wishing to shoot a production in Myanmar, thanks to the historical change with the new government, it is now easier than ever before but also takes four to five weeks to process all sorts of permit applications while some of the states might take longer. All you have to do is to be very patient in any correspondence with this recently opened-up country. Below are a few essential things you should know beforehand:

-    Both men and women wear what is known as ‘longyi’, a wrap-around skirt that is a traditional piece of Burmese clothing. Men tie theirs in the front and women fold the cloth over and secure it at the side.

-    Chewing betel nut is a national pastime. Small street stalls selling the palm-sized green leaves are everywhere. The leaves are filled with hard squares of betel nut, spices and sometimes a pinch of tobacco and then folded up, popped in the mouth and chewed. You have to chew a while before you feel the mild narcotic effect of the betel nut. Not only does betel nut stain your teeth a reddish-brown, the little packages are spat out on the floor when finished -- making for messy sidewalks. It's also highly addictive. 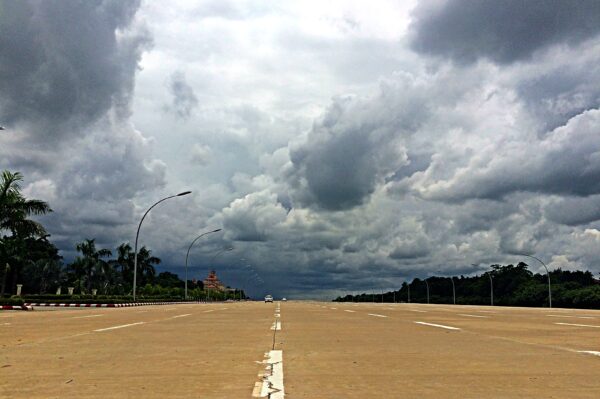 -    You’ll need plenty of cash while traveling inside the country and make sure that it's all clean. There are few ATMs in Myanmar, so visitors need to bring plenty of U.S. dollars in cash. The higher the denomination, the better the exchange rate. Your greenbacks should also be squeaky clean, that means no creases, stains, marks or tears. A note that's folded or even a little worn is worthless in Myanmar.

-    The Internet isn't censored anymore, but it’s still extremely slow. Internet service arrived in Myanmar in 2000, but high prices and slow connections mean it's still not widely used. Under the former government, websites such as YouTube, Facebook and Gmail were blocked but restrictions have largely been lifted. Far more popular than the internet are mobile phones, though here too, prices are high when compared with other neighbouring countries.

-    Hotel rates are expensive in comparison to the same rank in other Asian countries, it's a simple matter of supply and demand. Since the country opened up, business travelers and tourists have been boarding flights to Myanmar. There are a lot more visitors -- more than a million over last year -- but roughly the same number of hotels. More hotels are on the way but they take time to build and the accommodation shortage is expected to continue for up to 10 years. Make sure to reserve accommodation well ahead of time.