Australia-based Taxi Film Production, a partner of the Production Service Network has filmed their latest commercial for IBM on an offshore oil rig. The spot demonstrates the practical use of Watson, a virtual assistant designed to help those who work in highly demanding and dangerous roles. 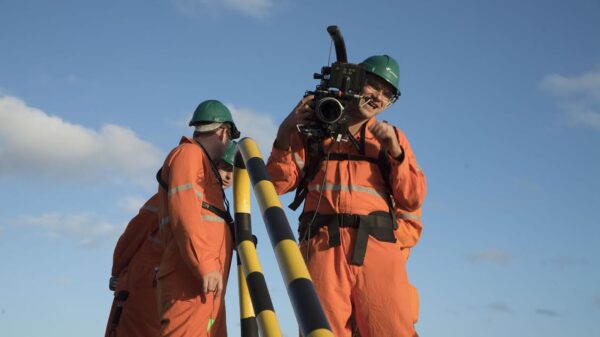 The oil rig’s location is 100 kilometres offshore from Karratha, a city close to the port of Dampier in Western Australia. Safety regulations permitted no more than five members of the production on-board the rig, an issue that Taxi Film resolved by hiring Tristan Houghton for his experience as both a Director and a DoP.

Producer Mark Bishop explains: “we hadn’t shot on an oil rig before but we do have plenty of experience shooting at mining sites in remote areas, which was useful as there are definite logistical similarities when it comes to productions on large-scale worksites.”

Detailing the safety precautions that took place before the shoot, Bishop adds: “we had to practice escaping from an underwater helicopter and crawling through a burning house – all simulations of course. But even with all the training, once we were on the rig there were very strict regulations on when and where we could move around, the location itself was in a constant state of movement and the employees on the rig were completely unused to having untrained crew around. With all of these elements factoring in it forced us to get quite creative once we started shooting.”

While non-applicable to commercials, Australia does operate a tax incentive for film and television productions that shoot on location. If a minimum spend of USD15 million is achieved, then productions can receive a rebate of 16.5%.

Western Australia introduced an additional incentive in May 2016 in the form of a regional film fund. Working from a total of AUD15 million, the fund will distribute investments to productions that incur a minimum local spend of USD1 million.

Recent productions to have scouted Western Australia include the feature films Breath and Bad Girl, having shot in Perth and the town of Denmark respectively.