In mid-September TLG was invited by Film Commission Poland to join six American Location Managers on a fam tour to explore the Central-European country. With many feature, TV, commercial and photo shoot credits between them, I was surprised to learn that, like me, Lori Balton, Becky Brake, Robin Citrin, Dow Griffith, Todd Christensen and John Hutchinson had never been to Poland before.

As none of us (pictured below) had ever set foot in the country, we were eager to see what Poland had to offer filmmakers and how it could be utilised by international productions. Our journey began in the capital Warsaw. As we walked from the Intercontinental Hotel to Sigismund’s Column, via the rooftop garden of the university's library, it became clear that the city had many personalities.

Poland’s credentials as a country ready for international productions can no longer be called into question.

end between the old and the new is largely a result of Warsaw’s destruction at the end of the Second World War. At first glance the 13th Century Old Town looks entirely original, but on closer inspection you can see that large parts are a faithful reconstruction.

But what really caught our attention was the Palace of Culture and Science (below), a towering structure that looms over the modern district of the city. With 3288 rooms including a large swimming pool and multiple lecture theatres, you could shoot an entire production within its walls. 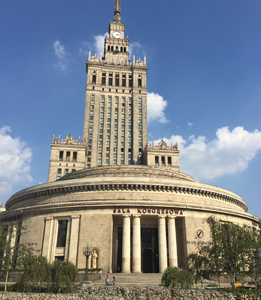 The value for money that such locations offer became increasingly apparent as the trip continued. At the request of Dow Griffith, we left the hotel a little earlier while in Kraków so that we could spend more time in the Tadeusz Sendzimir Steelworks. Grumblings of an early morning start soon disappeared however, with Lori Balton later proclaiming:

"Kraków's steel mill offered acres of locations. We all fell in love with the quintessential circular stairs, affording great shots up or down through the stairwell, only to discover that there were four of them, one in each corner of the building. This was emblematic of the trip: the patina, texture and creativity would astound you, and then you'd turn a corner only to see more."

Poland’s credentials as a country ready for international productions could no longer be called into question either after Steven Spielberg descended upon Wrocław two years ago for his Academy-Award winning Cold War drama, Bridge of Spies. The production doubled Miernicza and other streets in Wrocław rich with visual flare, for Berlin during Soviet occupation of the eastern district.

From the visually stern architecture of Miernicza, the last thing we expected to find was a fully fledged Japanese Garden only eight minutes drive away.

The use of Wrocław as Berlin is by no means exclusive to Bridge of Spies however. Directly influenced by German culture, a great portion of Wrocław’s architecture is almost indistinguishable from the German capital, allowing it to double with very little effort needed on part of the Director. To many, Wrocław has actually become preferable to Berlin itself on account of the capital’s dense population, which has made the acquisition of permits and arrangement of lock-offs more difficult than ever. 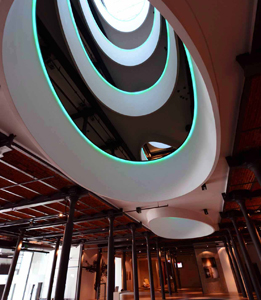 “In Poland there are three big professional film studios located in Warsaw, Wrocław and Kraków that have already cooperated successfully on several international film projects. Apart from that, a lot of professional editing and sound studios as well as over a dozen well-equipped animation and special effects studios provide services for film and commercial productions from all over the world thanks to their state-of-the-art equipment and, more importantly, the graphic talent, competence and professional education of Polish animators and special effects experts.”

From the visually stern architecture of Miernicza, the last thing we expected to find was a fully fledged Japanese Garden only eight minutes drive away. In fact the whole of Szczytnicki Park was a dream come true for the Location Managers; with the main fountain emitting tones of Washington D.C. while Centennial Hall looks like the inside of some intergalactic government building – impressive given that it was built in 1913.

Working specifically in Hong Kong and Shanghai and looking for examples of that. We would have loved to have come across a Centennial Hall.

In what should be a crime to the film industry, Centennial Hall has only been featured in one feature film to date, Stanisław Lenartowicz’s Zobaczymy się w niedzielę. This might not be the case for too long however, as Dow saw great potential in the venue, particularly for one of his most recent productions:

“On Ghost in the Shell, we were focusing on brutalist architecture, working specifically in Hong Kong and Shanghai and looking for examples of that. We would have loved to have come across a Centennial Hall. It predates brutalist architecture in a technical sense but it’s virtually the same structure, materials and mentality. It would have also been in keeping with the sci-fi nature of the story. If we’d been looking around in Poland and reached the Centennial, we’d have agreed that this was what we needed.”

The ability to repurpose a location, now over a century old as something way ahead of its time was not exclusive to the Centennial however; in fact it became a running theme throughout the fam tour, particularly in the region of Łódź. What was once a central hub for Poland’s industrial output, Łódź has seen most of its labour move elsewhere while the factories themselves have remained. 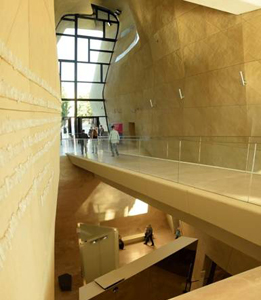 The Andels Hotel in Łódź appeared to be a simple red-brick factory as we walked on by, soon finding out that that’s exactly what it used to be before being transformed into a luxury hotel. Because of its previous occupation, all rooms as well as dining areas have extremely high ceilings to accommodate for large machinery, in turn providing plenty of space for production equipment.

It may sound like an East London postcode, but the EC1 building was once the crown jewel in Łódź industrial complex. The imposing structure once housed a large power plant but the process of deindustrialisation left the premises in decay, that is until the ingenious idea sprung forth to change it into a centre for science and technology.

While still under construction, we were shown parts of the building that looked as if they were taken right out of Star Trek, including an on-site 4K cinema encased in a giant dome that would be a prime location for sci-fi projects.

Some of Poland’s most original locations aren’t in plain sight, but rather hidden under the depths of the earth.

Rest assured however that alongside its strides toward modernity, we discovered that Poland has retained a great deal of its cultural heritage and locations that have aged beautifully with time. Nikiszowiec in Katowice is a housing district that was initially constructed to house the local coal miners at the beginning of the 20th century, and bears a similar resemblance to the working class towns found in Northern England. As the group soon realised however, minute details separate the two as Nikiszowiec’s iconic red window frames gave it a unique flair that came across in the pictures we took.

Looking at somewhere a little more up-market, the Poznański Palace is the embodiment of luxury and its expansive courtyard would be enough to make Gatsby himself jealous. I quizzed John Hutchinson, who is based out of New York about his reaction to the Palace:

“I was really happy to see the Poznański Palace in Łódź because it’s the type of location that my clients at Victoria’s Secret would definitely like. They’re always asking for new, ornate mansions and palaces like the ones in Versailles or Newport, Rhode Island. They’ve shot in these places and in every mansion in New York City, Long Island, Connecticut, Westchester and this might be something new for them. I think it would be perfect for a Victoria’s Secret Christmas commercial. They always do their biggest commercial for the Christmas season and I’d love to show this to them.”

Its capacity to double for major production hubs around the world and its affordable rates on local goods and services make it a prime location worth visiting. 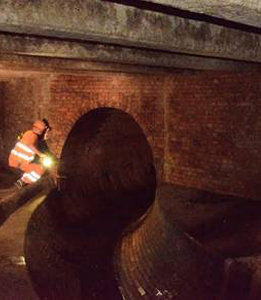 For the more adventurous among you, some of Poland’s most original locations aren’t in plain sight but rather hidden underground. The Wieliczka Salt Mine and the Underground City of Osówka are guaranteed to leave you feeling in awe. Despite both being underground however, the two locations couldn’t be more different.

The Salt Mine is filled with a wealth of chapels and shrines, providing the workers with a nearby place of worship and plenty for us to write home about. The Chapel of St. Kinga is arguably the most impressive of the lot, with atmospheric lighting made possible by four large chandeliers hanging from the ceiling. Fantasy productions would do well to use this location.

The Underground City on the other hand was constructed by the Nazis during the Second World War and to this day no one really knows what the base was being used for, which only added to the foreboding sense of horror as we travelled through a maze of unfinished tunnels caked in darkness.

The sheer variety of locations that we came across in Poland left us all completely amazed. Its capacity to double for major production hubs around the world and its affordable rates on local goods and services make it a prime location worth visiting. The 10 regional film funds can be accessed internationally by entering into a co-production agreement, and with a possible cash rebate on the horizon; Poland could become the major filming hub of Europe.

The Location Guide would like to thank Film Commission Poland for their invitation to join their familiarisation trip, and for the hard work of all those involved who made the tour such a great success.

Film Commission Poland and the regional film commissions will be attending FOCUS – the meeting place for international production in December. Register your attendance today for free.