Written by Tom Deehan on Oct 28, 2016. Posted in On Location / Production News

In their latest commercial for the domestic appliance distributor Hotpoint, production service company Pull the Trigger have transformed Dublin’s city centre into a UK village from the 1980s. The spot depicts a young man reminiscing about his childhood and the local bakery that inspired him to bake later in life. 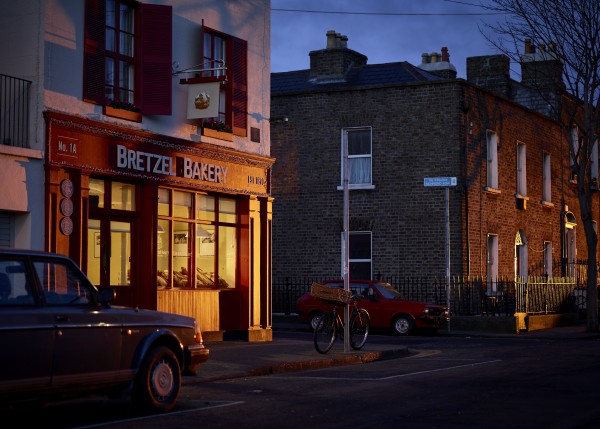 The spot’s Directors, Anthony Atanasio and Valerie Martinez explain: “it was the second time we’d been to Ireland to shoot in less than a year. The previous time was also for Hotpoint, but for a spot about wool and sheep which dealt with a Hotpoint washing machine."

They continue: "if you want lush European countryside and farms it’s the place to go without a doubt. But second time around we needed a small bakery and a dressed modern home, but what attracted us from the previous outing was how great the ambience of working in Ireland and Dublin with Irish crew really was."

Pull The Trigger has a variety of Directors in its employment, the company's previous credits include spots for Hendricks, the BBC, Mercedes and IKEA amongst others.

Max Brady, Executive Producer at Pull The Trigger adds: “as it happens the 80s bakery set up is in an area of Dublin, right beside the Pull The Trigger offices. It’s an area that hasn’t changed that much over the years, so the challenge here was to remove modern signage and clear the area of residential cars the night before. The fire oven we found in County Wicklow, again a working bakery. The more modern kitchen areas we found in Malahide Castle, which is a cookery school, so we used areas of it to create the baking sequences.”

Ireland's production incentive, Section 481 excludes commercials projects, applying only to feature films, television programmes and documentaries. Eligible productions can claim a tax relief of up to 32% with a per-project cap of EUR50 million, if they pass a cultural test.

The country does boast a developed production infrastructure however, helped by the Irish landscape’s popularity with a number of high-profile television shows such as Game of Thrones and Ripper Street.