Written by Tom Deehan on Nov 24, 2016. Posted in On Location / Production News

In their latest spot for Lexus’ new IS model car, Advertising Agency Dentsu and Production Company Bang TV filmed a high-octane chase in Rijeka on the Northern coast of Croatia. Production Services were provided by Bas Production as they handled the shoot which took place entirely on a local port. 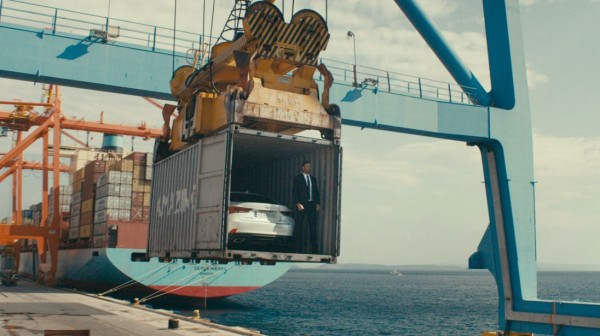 Speaking of the spot’s Director, Tom Whitehead, Producer at Bang TV explains: “Lino [Russell] was adamant from the start that the action had to be ‘balls-out’. Whilst the car was the star, the bike had to be ridden in an aggressive, threatening way to justify the chase. For one of the set-ups there was a serious risk of taking the car’s roof off as it dodged under a moving four ton container! Fortunately, we had world class drivers, able to get the right balance of safety and excitement.”

With offices in the UK and the US, Bang TV’s previous work includes spots for the BBC, Coors and Oppo.

He continues: “we were fortunate to have a long lead in time on the production, which enabled us to build a relationship with the people at the port. We have amazingly resourceful contacts out there thanks to our decade-long relationship with BAS Productions, and they pulled out every stop to make a viable plan for us, including three days testing and rehearsal on location.”

Croatia’s tax incentive programme doesn’t extend to commercials productions, instead offering a 20% cash rebate to feature films and television shows that incur a minimum spend of EUR300,000. The incentive has proved popular with international Producers, managing to draw high-profile productions such Game of Thrones and Star Wars: Episode VIII.