Written by Tom Deehan on Nov 10, 2016. Posted in On Location / Production News

The global production company, ICONOCLAST have shot their latest commercial for Haig whiskey in London and Barcelona, using both central and surrounding locations from the latter. With production services provided by 24:7, the Make Your Own Rules spot marks the first to be directed by Nima Nourizadeh since joining ICONOCLAST. 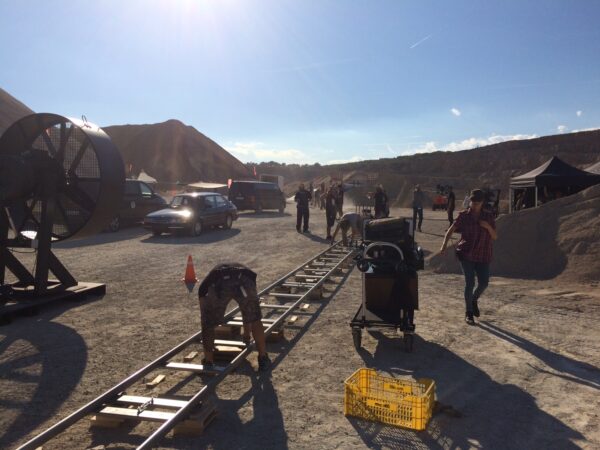 The production lasted for four days, with two days of filming delegated to both London and Barcelona. Advertising Haig’s new Clubman whiskey, the spot stars David Beckham as he enjoys the drink in a variety of social settings.

Speaking of the shoot, Ivo Van of 24:7 explains: “the commercial was set in London and Barcelona; the client wanted a more global look for the campaign by where Barcelona could offer up certain locations to broaden the scope. Our main hurdle apart from the financial ones were to fit in all the vignettes we needed to shoot in two days/nights. We had to be clever about finding locations that could offer many different looks.”

He continues: “we ended up shooting on a beach, a big warehouse to stage a clubbing scene, a golf course to simulate a huge open garden and the main location we found was just outside of Barcelona: a massive quarry which offered up many different potential setups. We used the quarry it to establish the very big crowd scenes for the music festival and the bomb fire.”

With offices in Barcelona, Madrid and Lisbon, 24:7’s wide range of commercials credits includes spots for Motorola, Mitsubishi and Wrigley’s.

Spain’s incentive programme, while inaccessible to commercials productions is still one of the most competitive of its kind on the market. Feature films and television programmes can access 15% tax credits for shooting on the mainland.

The incentive is bumped to 35% for productions that film on location in the Canary Islands or in the Northern region of Navarra.

A number of Spanish film commissions will be attending FOCUS – the meeting place for international production in December. Register your attendance today for free.

MAKE YOUR OWN RULES from TWENTYFOURSEVEN on Vimeo.