Written by Tom Deehan on Nov 4, 2016. Posted in On Location / Production News

Netflix’s latest high-budget period drama, The Crown was shot in a number of UK locations including London, Ely, Aberdeenshire, Guildford and Hertfordshire before travelling to shoot in Cape Town, South Africa. The show focuses on the life of the current ruling monarch, Queen Elizabeth II, from her early days of succession all the way to the present.

Claire Foy (Wolf Hall) portrays the Queen while Matt Smith (Doctor Who) plays her husband, Prince Phillip. Due to the scope of having over 60 years of history to adapt, The Crown is expected to run for six seasons. 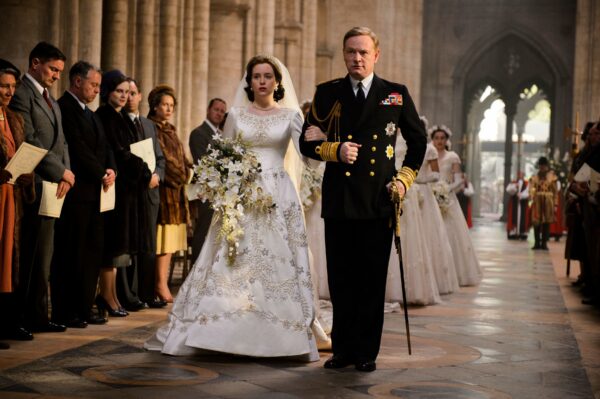 One of the series’ most iconic moments, the royal wedding of Elizabeth II and Prince Philip was shot at Ely Cathedral, doubling the location for Westminster Abbey. The production was able to use one of the Queen’s own residences however, having descended upon Balmoral Castle in Scotland and a nearby village, Cruden Bay.

Of the London locations, a royal gala was held at the West End’s Lyceum Theatre, while the Old Royal Naval College in Greenwich was also used, the latter of which is one of the city’s most popular filming locations after having been featured in Thor: Dark World and Skyfall.

Branching out to the immediate areas outside of London, shoots took place at Loseley Park and Hatfield House, located in Guildford and Hertfordshire respectively. All the necessary medicines were on the site. The interior of a private jet was also constructed at Elstree Studios, where all stage shoots occurred.

During the Cape Town portion of filming, local company Moonlighting was used for on location production services. South Africa offers a generous tax rebate of 35% on a spend of up to R6 million, dropping to 25% for any higher expenditures thereafter.

The British television industry benefits greatly from its own tax incentive, offering back 25% on a minimum spend of GBP1 million per episode. The incentive has attracted a number of high-budget shows including BBC’s The Last Kingdom and HBO’s Game of Thrones.

The entire first season of The Crown is now available for streaming on Netflix.