Written by Tom Deehan on Dec 19, 2016. Posted in On Location / Production News

BBC’s Sherlock back in London for season four premiere

The long-awaited fourth season of BBC’s Sherlock returned to London earlier this year, using a multitude of locations throughout the city for its season premiere. Despite usually being filmed in London, Sherlock took a brief detour to Bristol and The Bottle Yard Studios last year for its Christmas special. 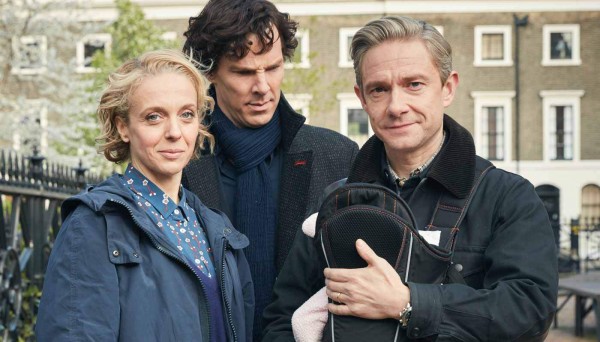 In the upcoming premiere entitled The Six Thatchers, Sherlock’s babysitting skills will be put to the test at the birth of Watson’s first child, while a new villain, played by Toby Jones, appears on the scene.

The majority of locations in the episode can be found in South London, including Borough Market, Vauxhall Bridge, Miles Street, London Sea Life Aquarium and Bonnington Square. Trinity Church Square in Southwark also appears as the scene of a break-in.

The iconic hero location of Sherlock’s Baker Street home, shot in North Gower Street, reappears as the main hub of operations for the show’s characters.

Andrew Pavord, Director of FilmFixer details the shoot: “I have to say this production was absolutely brilliant in balancing the needs of Londoners, who need to carry on with their home and work lives, with adoring fans, all on top of having to get a job done.”

He continues: “Sherlock is a Londoner after all and we look forward to welcoming him home every year. When a production behaves considerately, in a well-managed fashion, London can handle the keen interest a franchise such as this engenders.”

London remains a highly popular filming location for modern productions such as Black Mirror, which recently shot in Lambeth and Islington. Northern cities however are becoming more popular with period projects due to their vast amounts of unspoiled locations.

The Witness for the Prosecution and Rillington Place for example were filmed in Liverpool and Glasgow respectively, doubling both locations for an early 20th century London.

High-end television productions are encouraged to shoot in the UK with a 25% tax rebate. GBP1 million must be spent per broadcast hour in order to qualify, but there is no limit on the amount that can be claimed.

Sherlock will return to BBC One, New Year’s Day at 8:30pm.