23/32 films have taken inspiration from Game of Thrones in their latest commercials for cable television provider, HOT. Capturing the medieval aesthetic of the show, the two spots were filmed in a fortress in Kyiv.

Production services were provided by 23/32 films, while the project was managed by the Israeli company, Shoshi & Udi Productions. 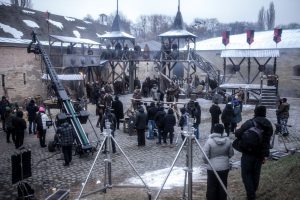 In detailing the location, Executive Producer Maria Fabro explains: “it is a Kyiv Fortress dating back to 1844. It is currently a museum and considered to be a historical heritage site. This location was chosen because the plots of the films were unravelling in the kingdom of Game of Thrones and we needed an impressive medieval location that could provide the atmosphere of those times and help the spots look believable.”

She continues: “the most challenging part of the production was to preserve the integrity of this historical site. Many shots involved special effects (including fire, snow and smoke), battle scenes and the presence of quite a big crew. Together with location officials, we carefully planned each shot and organised a workshop for the location representatives, where the production and special effects team explained all the details of production and the precautions. These were implemented to ensure that no accidents or damage to the fortification structures.”

Ukraine is known for its plentiful examples of medieval architecture, making the country an easy option for projects hoping to secure a period backdrop. 23/32 films utilised a similar location in a previous spot for JOYA ice cream. Scenes were shot in and around the Khotyn fortress in Western Ukraine.

A 25% cash rebate incentive was introduced into Ukrainian law in late 2016. While non-applicable to commercials productions, the incentive does make it easier for feature films and television shows to shoot on location.