Written by Tom Deehan on Jan 25, 2017. Posted in General Interest

After debuting at the FOCUS event in December 2016, CraftWorks made its return today with a wealth of industry lead panels, catering to professionals working in the production industry.

Hosted by David Reviews and the Advertising Producers Association, the third iteration of CraftWorks was held at the London School of Economics’ Student Union. 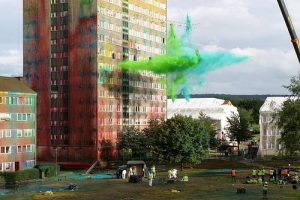 The event was comprised of four panels:

Heathrow’s hugely successful; Coming Home for Christmas commercial was the initial focus of today’s CraftWorks event. As the professionals behind the spot broke down each stage of the production in detail, they noted the difficulty of shooting in a major international airport.

Aside from having to undergo strict security checks when bringing equipment into the airport, the crew were given clear instructions to not obstruct any travellers during filming.

As the showrunner for Channel 4’s groundbreaking comedy Green Wing, Victoria Pile offered her insight into the process of getting a comedy series off the ground and why slapstick still has a place in commercial productions.

Following a screening of his latest short film, Etat d’alerte sa mère!, Director Sebastien Petretti took to the stage to explain how the medium can be used most effectively. In detailing the social commentary behind his five minute film, Petretti noted how the project was inspired by instances of racism he had witnessed in Belgium.

Known for their work on Sony Bravia’s iconic Paint commercial, the team behind the project were reassembled to discuss what went into making one of the most complicated yet visually stunning spots of recent memory. The team explained that due to the health and safety concerns involving paint, an alternative substance comprised of eco-friendly ingredients and food colouring was used.