Written by Tom Deehan on Jan 31, 2017. Posted in General Interest

London Mayor, Sadiq Khan has announced that a task force consisting of BBP Regeneration, SQW and Professor Richard Miller of the University of Hertfordshire will investigate the economic feasibility of constructing a film studio in Dagenham.

This marks the first update regarding the studio since the initial plans were announced in October 2016. An estimated GBP80,000 has been set aside to fund the feasibility study. 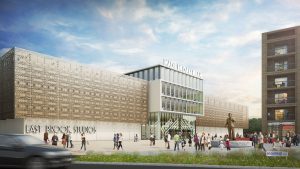 Sadiq explains: “we need to ensure we continue to attract the brightest, most diverse creative talent to London and we need to invest in the kind of physical infrastructure that will ensure our city remains competitive on the global stage.”

Having a major film studio in London’s East-End could bring an economic boom to the area, as nearby facilities such as Pinewood Studios have enjoyed unparalleled success in recent years.

Sadiq Khan recently visited the London-based visual effects company, Double Negative, to show his support for the industry and express his intent to project London as a global hub for filmmaking in the face of President Donald Trump’s recent ban on immigration from certain countries to the US.

During his visit, Sadiq noted: “film-makers, those involved in this industry, will have seen what Donald trump has said. If it’s the case that Donald Trump’s policies are leading those people to leave America, they are welcome here.”

The UK production industry is already stimulated by a 25% tax rebate incentive but as the pound weakened throughout 2016, the UK became even more cost-effective for international projects to film in.

Last week, the British Film Institute revealed that an incredible GBP1.6 billion – the largest UK production spent of all time – was amassed throughout 2016. This success can be attributed to a bevy of high-budget films including Rogue One and Fantastic Beasts and Where to Find Them.