One of La La Land’s most spectacular technical feats can be found in its opening sequence, wherein a dance number takes place amidst a traffic jam on the carpool lanes connecting the 105 and 110 freeways. The lock-off was coordinated by Robert Foulkes, the film’s Supervising Location Manager. 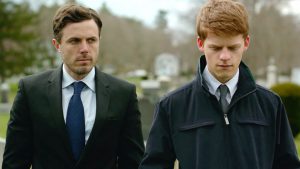 Barry Jenkins’s Moonlight scored the highly coveted award of Best Motion Picture (Drama), a considerable victory given last year’s controversy about a lack of diverse representation during the awards season.

Following the life of a young gay African-American man struggling to come to terms with his sexuality, Moonlight was shot entirely in Florida. Despite its lack of a financial incentive, Jenkins wanted to film in the neighbourhood where he grew up, which is why most of the scenes were shot in Miami.

As some pundits predicted, Casey Affleck won Best Performance by an Actor (Drama) for his role in Manchester by the Sea. Aside from filming in its namesake location, Manchester by the Sea features a range of locales from Massachusetts including Beverly, Lynn and Essex.

Massachusetts offers a three tiered incentive package to entice filmmakers to the state. Projects that spend at least 50% of their budget locally (and more than USD50,000) can receive a 25% production credit, a 25% payroll credit and exemption from sales tax.

Best Television Series – Drama:
The Crown (Winner)
Game of Thrones
Stranger Things
This Is Us
Westworld

Best Performance by an Actor in a Limited Series or Motion Picture Made for Television:
Riz Ahmed – The Night Of
Bryan Cranston – All The Way
Tom Hiddleston – The Night Manager (Winner)
John Turturro – The Night Of
Courtney B. Vance – The People v. O.J. Simpson: American Crime Story

Best Performance by an Actress in a Supporting Role in a Series, Limited Series or Motion Picture Made for Television:
Olivia Colman – The Night Manager (Winner)
Lena Headey – Game Of Thrones
Chrissy Metz – This Is Us
Mandy Moore – This Is Us
Kerry Washington – Confirmation