The news was confirmed as Director Chris Miller posted a picture to Twitter depicting the film’s star, Alden Ehrenreich, holding a clapperboard. Ehrenreich previously rose to fame as a dim-witted Hollywood star in the Coen Brothers’ Hail Caesar. 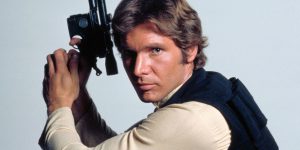 The film will take place prior to the events of Star Wars: A New Hope, depicting the earlier years of the iconic pilot. Woody Harrelson was recently cast as Han Solo’s mentor, and will star alongside Donald Glover and Emilia Clarke.

The decision to shoot at Pinewood Studios is unsurprising, given that the facility hosted production on the last two entries in the franchise: Star Wars: The Force Awakens and Rogue One. The studio also recently completed work on the upcoming sequel, Star Wars: The Last Jedi.

There’s no word yet as to where the production will head after the studio shoots are complete, but lavish locations are to be expected. The Force Awakens made extensive use of the desert in Abu Dhabi, while Rogue One was noteworthy for shooting in the Maldives for its climactic battle sequence.

Lucasfilm Ltd., the production company behind the film, will be able to take advantage of the UK’s tax relief incentive. A rebate of up to 25% with no cap can be claimed by projects that spend at least 10% of their budget locally, making the scheme highly popular amongst high-budget productions.