Written by Tom Deehan on Jan 26, 2017. Posted in General Interest

The UK production industry saw its most successful year ever in 2016, taking in a total of GBP1.6 billion. Of the total spend, GBP1.35 billion was sourced from feature films while television productions brought in GBP478 million. The UK box office also endured similar success with its second highest income of GBP1.227 billion. 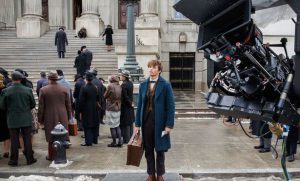 Rogue One was largely filmed at Pinewood Studios, with on location scenes shot at Canary Wharf Underground Station and Bovingdon Airfield in Hertfordshire.

On the side of independent films, Absolutely Fabulous: The Movie came out on top with GBP16.1 million in domestic ticket sales.

Matt Hancock, Minister for Digital and Culture explains: "if like me you love film, you'll love this news of record breaking levels of UK production. These record-breaking production statistics demonstrate that the UK's world-leading film sector continues to thrive and that Britain remains open for business. With inward investment levels for film and television at new highs, we will continue to build on this tremendous success, forging a global Britain that remains the centre for attracting and developing the world's best creative talent.”

Amanda Nevill, CEO of the BFI adds: “with film production reaching GBP1.6 billion for the first time, today’s statistics show that UK film is open for business and our position as a global leader for film and TV production is stronger than ever. Nevertheless, as set out in our five year strategy BFI2022, there is much to be done to ensure British independent films are able to better capitalise on opportunities in this economically and creatively buoyant environment.”

2016 marks the third year in a row that the UK production industry has exceeded an income of GBP1 billion. The 25% tax rebate offered to feature films and high-end television shows has had a significant influence on the recent growth of the UK’s production sector. The incentive also extends to video game production.