Written by Tom Deehan on Jan 20, 2017. Posted in On Location / Production News

Woody Harrelson broadcasts live film from the streets of London

Woody Harrelson made cinematic history this morning by directing and starring in the world’s first live film. Entitled Lost in London, filming kicked off a 2am in the borough of Camden, travelling to Soho’s Grape Street and back again.

Based on what Harrelson describes as “one of the worst nights of his life”, the film follows a downward spiral as the actor becomes embroiled in a sex scandal, gets into a fight and eventually lands himself in jail. 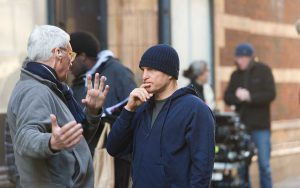 Detailing the project prior to the broadcast, Location Manager David Broder explains: “they outlined the story and what they were trying to do. I thought okay, this is crazy but interesting. Woody Harrelson came over – I had some initial ideas about areas in London where we could potentially do it. At that stage it was one camera, one take. We looked at real restaurants, real nightclubs, lots of the West End theatres.”

“That was with Woody and it took a few weeks to realise that… we needed to set up in one place – which is the old Central Saint Martins building, where we could have two big sets – our nightclub and a police station setting in the basement and make that our base. Around that time in October the live broadcast idea started to come into the mix, which made it even more complicated and technically it had never been done before.”

He continues: “here we are in January and we’ve managed to pull it off. We’ve managed to get permissions for all the locations from the council authorities, the police, TFL. Also being able to get RF aerials, transmitters on rooftops, which at last count was 47, that takes a huge amount of work and a lot of cable. We have a run that’s nearly two miles in length. This is in Central London where that’s virtually impossible to do.”

Feature films of all varieties can access a 25% tax rebate from shooting in the UK, under the requirement that at least 10% of the budget is spent locally. The incentive has proven popular with high budget films such as Avengers: Infinity War, which is scheduled to shoot in Scotland next month.

Lost in London was screened live at Picturehouse Central in London and to 500 cinemas throughout the United States. The film will be released in cinemas later this year.