Written by Tom Deehan on Feb 23, 2017. Posted in On Location / Production News

During production on the latest season of ABC’s The Bachelor, the cast and crew travelled to Finnish Lapland, shooting a number of scenes in Inari-Saariselkä. The Finnish Lapland Film Commission (a subsidiary of House of Lapland) provided on location assistance during the production’s stay in November 2016.

Teija-Liisa Paananen of the Finnish Lapland Film Commission states: “it was a true joy to witness how much effort and attention to detail goes into making The Bachelor. We were also very happy to be able to fulfil the needs and wishes presented to us by the production staff. It was a good reminder for us Lapland residents to see just how beautiful and special The Bachelor’s team thought our landscapes, activities and the light during the polar night were. We can’t wait to see the scenes shot in Lapland on TV.” 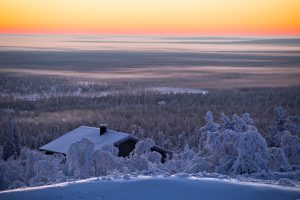 The incentive has an annual fund of EUR10 million, putting Finland in a better position to compete with nearby countries such as Iceland and Norway, which have been running their own incentives for some time.

She continues: “Lapland offers a diverse range of shooting locations for a variety of needs: the fells, the enchanting fairy tale forests and the unique pallet of colours are all within reach. This new incentive ensures that even large production crews can tap into the magic of Lapland in a cost-efficient way. You can show beautiful wilderness on screen but still have access to a modern traffic network and high-quality support services.”

Due to their popularity, reality television shows can have a major impact on tourism. Keeping Up with the Kardashians filmed part of its sixth season in Bora Bora, leading to a spike in tourism to the island.

The ninth episode of The Bachelor’s 21st season, which features the Finnish locales, will air February 27th, 8/7c on ABC.