Written by Tom Deehan on Feb 9, 2017. Posted in On Location / Production News

American remake of The Intouchables swaps Paris for Philadelphia

An American remake of the critically acclaimed French film, The Intouchables, is currently being filmed in Philadelphia. Entitled, Untouchable, the remake stars Bryan Cranston as a quadriplegic millionaire who hires a younger man, played by Kevin Hart, to be his caregiver.

Three police cars were on hand during Monday’s shoot as Cranston and Heart drove past City Hall and through Broad Street, with a camera rig attached to the side of the car. 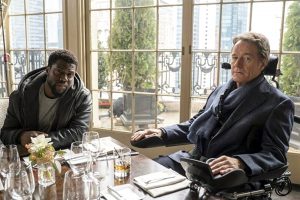 Scenes were also shot at the Centre for Architecture and Design, which features a highly modern layout after moving to its current premises in 2008.

Untouchable is being financed by The Weinstein Company, who acquired the rights to make an English-language remake of The Intouchables after handling its international distribution.

Julianna Margulies will star as Cranston’s love interest, alongside Aja Naomi King and Pia Mechler. Simon Curtis was initially scheduled to direct the film but was dropped from the project, later replaced by Neil Burger.

The Intouchables was a sleeper hit. With a budget of EUR.9.5 million, the film grossed roughly EUR346 million worldwide and won a variety of awards.

The state of Pennsylvania offers a 25% tax credit to a wide variety of productions that shoot on location. The incentive programme is one of the few in the United States that extends to commercials productions.

Projects are expected to spend at least at least 60% of their budget locally to secure the tax credit. The scheme operates on an annual fund of USD60 million.

The Oscar nominated feature film, Fences, starring Denzel Washington and Viola Davis, recently made use of the tax credit after shooting in Pittsburgh.