Written by Tom Deehan on Feb 21, 2017. Posted in On Location / Production News

The show’s Producer, Dan Winch states: “with our Broadchurch world well and truly established in the South West, Bristol was the perfect production base. Better still, The Bottle Yard not only enabled us the ability to house our production offices, studio and storage under one roof, it is also located brilliantly for access when filming in central Bristol or indeed the outskirts. The Bottle Yard team have been reachable and supportive every step of the way and above all, have made us feel incredibly at home in Bristol.” 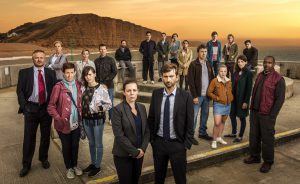 Previous seasons were partially filmed at Vision Studios in Bristol and the now closed, Waterloo Film Studios in London. Broadchurch is produced by Kudos Film and Television, whose other credits include Apple Tree Yard and Humans.

Fiona Francombe, The Bottle Yard Studios’ Site Director adds: “Broadchurch is a phenomenon in its own right and an exceptional title to add to our credits. It was an honour to have Dan and the team here at The Bottle Yard Studios and we’re glad to have delivered the space and the privacy the cast and crew needed whilst working on this highly anticipated final series.”

Clevedon, Somerset and West Bay, Dorset also return as staple locations of the series. West Bay’s Harbour Cliff is one of the most iconic locations featured on the show, always making a prominent appearance in Broadchurch’s advertising.

High-end television shows can receive a 25% tax rebate upon meeting a minimum spend of GBP1 million per broadcast hour, when filming in the UK. Productions are also required to pass a cultural test to qualify.

The Bottle Yard Studios recently hosted filmed on Sherlock and Poldark, both of which are among the BBC’s most popular productions. The studio is also well known for adopting environmentally friendly procedures.