Written by Sharanika Akter on Feb 7, 2017. Posted in Contributors

Open for Filming: The Brooklyn Museum

New York City is home to some of the largest and well-known museums in the world. Who hasn’t heard of the Metropolitan Museum of Art (MET), the Museum of Modern Art (MoMA) or the American Museum of Natural History (AMNH)?

It’s possible you have even seen these places in your favorite films or TV shows. Or maybe, you think you did. These Manhattan institutions are open 7 days a week to the public, so to film there you would have to work during off hours and deal with extremely high location fees. Shawn Levy’s Night at the Museum series was filmed almost entirely in a studio. 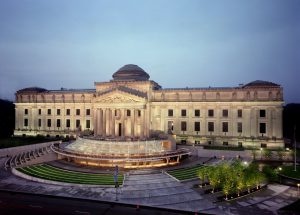 If your script calls for shooting in New York City with a scene at the MET or the AMNH or even JFK airport, you may be able to avoid the hassle of getting difficult to obtain permits for filming in these locations by taking your crew to the Brooklyn Museum.

A widely renowned art institution, the Brooklyn Museum sits in the heart of one the most creative, exciting, and fast paced urban centers of the world—Brooklyn. The museum houses an extensive permanent collection that includes Ancient Egyptian masterpieces, African art, European paintings, period rooms and contemporary art. Just like the art contained in its interior, the exterior of the Brooklyn Museum combines the modern and traditional with architecture that includes a façade with Roman columns encased in a beautiful glass pavilion that covers, what would be, the front steps. The museum is home to contemporary artists and ideas.  It is also home to feminist art, like Judy Chicago’s The Dinner Party installation and has hosted controversial exhibitions in the past like Sensation, the survey of Charles Saatchi ‘s contemporary art collection.

What many people may not know is that aside from the exhibitions, the Brooklyn Museum houses a great multitude of film-friendly and ready-to-shoot locations.

The Martha A. and Robert S. Rubin Pavilion and Lobby is what gives a modern look to the traditional museum. Designed by Polshek Partnership Architects, the sheer glass pavilion brings sunlight to the entrance of the museum giving it a light and airy feeling. This pavilion area can be made into an airport terminal, car dealership or an embassy setting. To promote their new uniforms, American Airlines did a commercial at the pavilion last year, doubling for an airport. 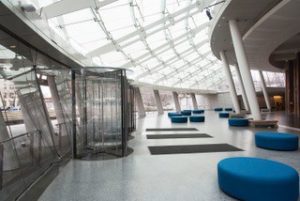 The magnificent Beaux-Arts Court can function as a ballroom as it measures 10,000 square feet and two stories high. The room features a brass chandelier hanging from the dramatic skylight ceiling. The museum also has a beautiful glass staircase that could work well for a cat and mouse scene.

Of course, the Brooklyn Museum’s greatest function is to act as itself or as another museum. According to Ruth Janson, Manager of Location Photography and Image Services at the Brooklyn Museum, the Egyptian and American galleries have recently been renovated to look more “traditional.” As a result, the Brooklyn Museum can act as the MET or the MoMA (Museum of Modern Art) depending on the type of gallery required.

The museum is open five days and week and is closed from the public on Mondays and Tuesdays, which provide for great shoot days. Other advantages of the museum include a large freight elevator and an expansive parking lot. In the past, the museum has accommodated over 150 background characters and crew by having them situated in the Great Hall with craft service while shooting took place in the pavilion. On such days, a third of the parking lot usually gets filled.

A typical shoot at this museum usually takes two and a half days. One day is spent in preparations, another day is spent in shooting and half of a day is spent in wrapping up. Although the museum is closed on Mondays and Tuesdays, wrap-ups can usually go until 11am Wednesday mornings to accommodate multi-day shoots. 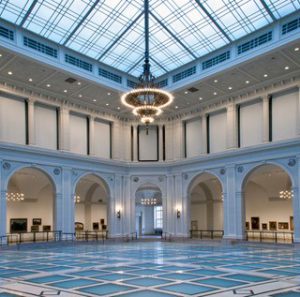 Now, you must be wondering about some the museum’s rules for filming. An important museum policy for using the space includes a thorough examination of scripts to make sure that the museum remains anonymous and unaffiliated with the production. They will always read the scripts to make sure that they are not involved in any controversial subjects that the production might be expressing. Another important point is that the Brooklyn Museum certainly allows prop art to be brought in. Otherwise, museum artwork can be used under certain limitations. In any case, the museum is happy to decoratively cover sculptures and artwork or block them from view as necessary and prescribed by copyright restrictions.

Some past productions at the Brooklyn Museum include TV shows such as Elementary, Blacklist, The Americans, Brain Dead, Ink Master and Gotham. Several episodes of Elementary were shot at the Brooklyn Museum. Last year, a Chinese TV series was also shot at the museum. Janson says the museum is not new to the TV industry, but would like to see more low-key fashion and international commercial and still productions.

For Janson, one of the most exciting productions was an episode shot for Elementary in which the space was transformed into a natural history museum in just two days. Prop artists put together fossilized bones of Tyrannosaurus Rex and other dinosaurs creating dramatic visuals along with excellent lighting. 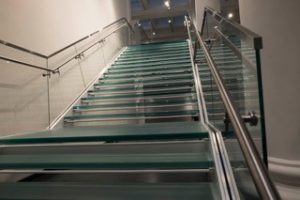 Another exciting production was a 19-day shoot for Gary Marshall’s New Years Eve in 2011. Not only was it one of the museum’s longest shoots, but also it also required the museum to close off the 3rd floor court and sometimes close its continuous galleries. This goes to show that a lot is possible when shooting at the Brooklyn Museum.

Janson concludes: “shooting at the Brooklyn Museum is an arrangement that works out for everyone.” Not only are production companies spending less money and saving themselves from the hassle of filming at the bigger and busier locations, shooting at this museum as an alternative prevents interrupting the busy flow of bodies in Manhattan and allows more freedom and space to the production company, while still representing those institutions in production.

Sharanika Akter is a Production Assistant and Content Writer for MediaCombo, a New York based production service company with over 25 years of experience in the industry.

All images featured in this article were provided by The Brooklyn Museum. For more details on using the museum as a film location, please contact Ruth Janson on (+1)718-501-6202. Alternatively, you can email Ruth at filmshoots@brooklynmuseum.org.